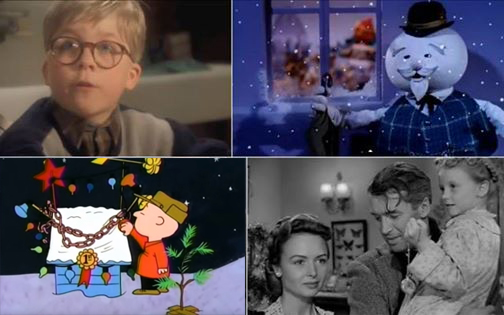 Which movies and TV specials should you watch to help put you in the holiday spirit? Before we get to the Top 25 countdown, let’s settle some age-old questions and raging debates.

To start with the obvious, “It’s a Wonderful Life” and “Miracle on 34th Street” are undisputed classics. Both earn their reputations as must-see masterpieces for their combination of magical-realism themes, Americana values and inspirational portraits of the human spirit.

But a more pressing question remains: Is “Die Hard” a Christmas movie? “Close,” Bruce Willis told WTOP last year on the Gershwin Prize red carpet. Featured on the soundtrack, Run DMC was more definitive on the Kennedy Center red carpet: “‘Die Hard’ is a Christmas movie! Action movie second. ‘Die Hard’ is actually a Run DMC video that happens to be a movie.”

My hot take? “Meet Me in St. Louis” is far superior to “White Christmas” as a classic holiday musical. Judy Garland’s “Have Yourself a Merry Little Christmas” was written specifically for this picture, while Bing Crosby’s title song was a rehash from his previous film “Holiday Inn.”

Most overrated? “Love Actually.” Parts are pure gold, but other parts drag. Martin Freeman’s sexcapade subplot makes for an awkward holiday rental with the family, while Mariah Carey’s song “All I Want for Christmas is You” pales in comparison to Vince Vance & the Valiants.

Most underrated? “Elf” and “The Santa Clause.” Older generations continue to overlook the looming all-time powerhouses of these instant classics beloved by Xennials and Millennials.

With all due respect to Bill Murray and George C. Scott, the best version of Charles Dickens’ “A Christmas Carol” will always be the 1951 black-and-white British film starring Alastair Sim.

Forget the Brat Pack, John Hughes’ lasting legacy will be his holiday trilogy of “Planes, Trains & Automobiles” (Thanksgiving), “Home Alone” (Christmas) and “Christmas Vacation” (Christmas), whose holiday themes will stand the test of time over the outdated mores of ’80s teenagers.

And on Christmas Day, hide the remote for 24 straight hours of “A Christmas Story,” as Jean Shepherd nostalgically narrates more pop culture quotables than any other holiday movie.

As for television, we used to have to wait a full year to watch our favorite TV specials (or hit record on the VCR). Today, the beauty of the streaming era is that they’re all readily available.

Rankin & Bass are the kings, from the stop-motion of Burl Ives (“Rudolph the Red-Nosed Reindeer”) and Fred Astaire (“Santa Claus is Comin’ to Town”) to the hand-drawn animation of Jimmy Durante (“Frosty the Snowman”) and Joel Grey (“Twas the Night Before Christmas.”)

Other cell-animation classics include the roast beast of Dr. Seuss’ “How the Grinch Stole Christmas,” Odie’s homemade back scratcher in Jim Davis’ “A Garfield Christmas Special” and Linus’ emotional nativity speech in Charles Schultz’s timeless “A Charlie Brown Christmas.”

And for the extra young at heart, I adore Jim Henson’s “A Muppet Family Christmas” (“Watch out for the icy patch!”) and “Christmas Eve on Sesame Street” (“Keep Christmas with you”).

Where do all of these rank on my all-time list? Check out my Top 25 in the gallery below: