Here’s to you, Mr. Garfunkel: Kennedy Center echoes with ‘Sounds of Silence’ 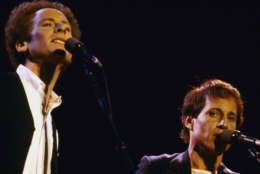 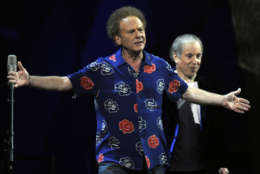 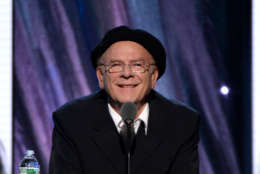 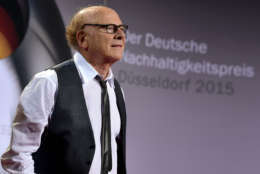 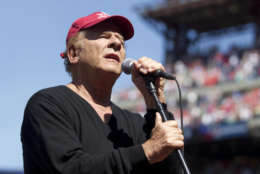 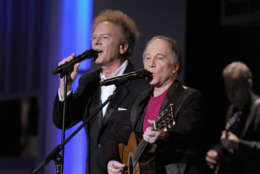 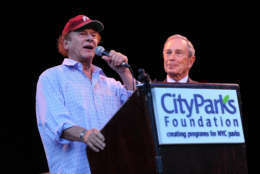 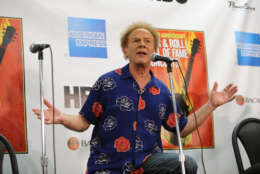 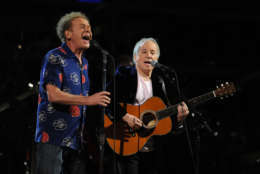 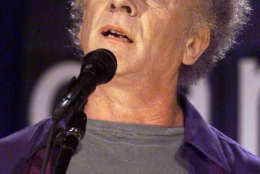 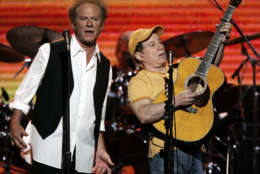 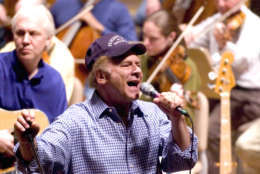 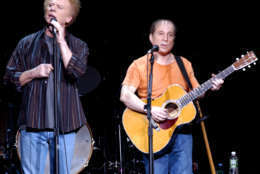 WASHINGTON — He was one half of the legendary folk-rock duo Simon & Garfunkel.

This Saturday, Art Garfunkel performs “In Close-Up” at the Kennedy Center, bringing a mix of solo hits, Simon & Garfunkel classics and cuts from the greatest 20th century songwriters. In between, he’ll share excerpts from his Sept. 26 autobiography, “What Is It All But Luminous.”

“I’ve been writing this thing, not knowing what I was doing, just following the pen to paper whenever inspiration would get me,” Garfunkel told WTOP. “Out would come these prose poems. They would consume the week. … Now a book of my life is coming out in September. It has a lot of these little one-minute jobs. I serve them up on stage between the songs.”

Born in Queens in 1941, Garfunkel grew up the middle child of a middle-class Jewish family with his traveling-salesman father Jack and mother Rose, both second-generation Americans.

“They were musical, but in an amateur way. Nobody was serious about trying to get on the charts, except me,” Garfunkel said. “I’ve been singing since I was 5. I was a crooner in the alleys of Queens. … My friend, Paul Simon, was three blocks away. That got us together.”

At age 11, sixth-grade Simon and Garfunkel began performing together at school dances and listening to radio disc jockey Alan Freed, who introduced a rising generation to rock ‘n’ roll.

“We harmonized and wrote our tunes and started bringing our songs into New York City to the Brill Building,” Garfunkel said. “We signed a contract. They called us Tom & Jerry [because] we never could find a name. We had a minor hit record called ‘Hey Schoolgirl’ when we were high school seniors! This is very exciting stuff for a 16-year-old kid, making a few thousand dollars and going to college on that money — it propelled you into grown-up life.”

Shortly after college, the duo scrapped ‘Tom & Jerry’ and went with their own names, Simon & Garfunkel, as Simon penned the songs and Garfunkel sang lead vocals. Together, they visited Columbia Records for a four-song audition at Studio A on 7th Avenue in New York in 1964.

“We left the studio hoping Columbia would sign us but feeling very good about our performance,” Garfunkel said. “Paul called me that night: ‘Artie, how come you’re not the greatest singer?’ That was his way of saying, ‘You did good work today! I think we got signed!’ This is Queens slang where you say things in reverse. That’s the sound of Paul & Arthur.”

The studio engineer that day was Roy Halee, who would collaborate with them for years to come as they were signed by Columbia. Their debut studio album “Wednesday Morning, 3 A.M.” (1964) featured the haunting “The Sound of Silence,” painting a “vision that was planted in my brain” and insisting that “the words of the prophets are written on the subway walls.”

“‘The Sound of Silence’ is very urban imagery [that] makes me want to defer to Paul for any explanation,” Garfunkel said. “I sang the lead vocal: ‘Hello, darkness my old friend.’ I’m the tenor in front there; Paul’s doing supportive harmony. What can I say? We liked it!”

“It’s very flowy,” Garfunkel said. “It’s a very organic, unforced musical attempt. You hop aboard and you ride it. It starts with Paul Simon, a very talented musical cat. … I wrote the counter melody between the lines. It’s as an old English ballad. The secret is in Paul’s beautiful picking guitar. … The naturalism, ease and rhythm of Paul’s playing made the vocals so effortless.”

Both “The Sound of Silence” and “Scaborough Fair/Canticle” provided a hypnotic musical bed for the groundbreaking, coming-of-age sex comedy “The Graduate” (1967), for which Oscar-winning director Mike Nichols recruited Simon & Garfunkel to pen the entire soundtrack.

“We were new to Hollywood,” Garfunkel said. “He was looking for four songs [but] began to live with songs we already had. He started loving ‘Sound of Silence’ and ‘Scarborogh Fair,’ so he got it down to one. ‘Can you give me one new song?’ We struggled. I said to Mike, ‘Well, Paul has a song he’s been working on called ‘Mrs. Roosevelt.’ … Mike says, ‘You’ve had a song called ‘Mrs. Roosevelt’ and you didn’t think how obvious that would be for ‘Mrs. Robinson?!?'”

Thus, “Mrs. Robinson” was born, referencing pop-culture (“Coo, coo, kachoo”), American history (“Where have you gone, Joe DiMaggio?”) and religious symbols (“Jesus loves you more than you will know”). Along the way, the film invented the wall-to-wall soundtrack, including a specific scene where Simon’s guitar slows down as Benjamin’s car runs out of gas.

“We worked the picture there in Hollywood on the big sound stage, a giant room with a huge screen,” Garfunkel said. “The picture dictated Paul’s performance. He’s standing there with his neck craned up at the screen, getting exactly the rhythm to match the picture.”

Not only did the film give Anne Bancroft a career role, it launched Dustin Hoffman’s career.

“I ran into Dustin in an office building in New York after that,” Garfunkel said. “I don’t think we had met until then. We both shared that wonderful success, but we never worked together. … I got a huge bear hug and that brilliant smile that’s so incandescent. He was a doll.”

To his surprise, Nichols cast Garfunkel in “Catch-22” (1970) and again in “Carnal Knowledge” (1971), which earned him a Golden Globe nomination for Best Supporting Actor.

“That was Mike’s idea,” Garfunkel said. “I was not pursuing an acting career. After I did ‘Catch-22,’ I guess he felt, ‘Artie can do this stuff.’ He had a Jules Feiffer script called ‘Carnal Knowledge’ already prepared. It’s all Mike being the protagonist and me responding.”

The film acting took time away from the music studio, causing Simon & Garfunkel’s fourth studio album “Bookends” (1968) to feature a more polished version of “Mrs. Robinson,” unused material from “The Graduate” and new hits like “America.” It went double platinum.

Still, nothing could have prepared them for the popularity of their fifth and final studio album, “Bridge Over Troubled Water” (1970). The smash success went eight-times platinum off the strength of the title track, which Garfunkel calls “a great song,” and the timeless gem “The Boxer,” describing a lonely fighter scrapping to survive with the refrain “lai la lai.”

“When you don’t have a lyric, you sing ‘lai la lai,'” Garfunkel joked. “After the fact, these things look important, but before the fact, they’re things you stumble into. … You’d be amazed how the song could fall flat if the singer didn’t put some shine into it. ‘The Boxer’ is a terrific production. It feels like it’s got $90 million of production. It’s so worked on, fixed, polished.”

Not only did the album win Album of the Year at the Grammys, it was the top-selling album of all time until Michael Jackson’s “Thriller.” Ironically, there was “troubled water” for the duo, who broke up shortly afterward. They’ve reunited only occasionally with “The Concert in Central Park” in 1981, a subsequent world tour and their Rock Hall of Fame induction in 1990.

Which brings us to the question: how often do Simon & Garfunkel keep in touch?

“Wouldn’t you like to know,” Garfunkel said with a playful tease before elaborating. “Like seasons, we have warm periods, we have cool periods. We leave it alone. A friendship is fun when you’re tickled by the same things in life, then it’s left alone when you’re not. That’s all.”

Yes, their friendship changes with the seasons, just like the lyrics to “April Come She Will.” In the meantime, Garfunkel keeps plenty busy recording, touring and, most of all, reading. Turns out, he’s quite the bibliophile, keeping a detailed list of every book he has read since 1968.

When praised for reading “thousands” of books, he offers a savant-like correction.

What is his favorite novel of all time?

“‘War and Peace,'” Garfunkel said. “What a book! It deserves its fabulous reputation.”

Now, he can add his own autobiography to that list.

Click here for more information. Listen to our full conversation with Art Garfunkel below: 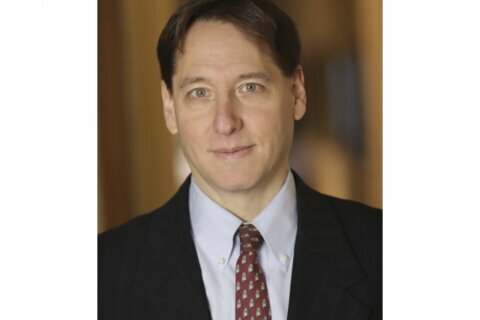