Advocates are encouraging people with learning disabilities to make a plan to vote before or on Election Day.
Listen now to WTOP News WTOP.com | Alexa | Google Home | WTOP App | 103.5 FM

Advocates are encouraging people with learning disabilities to make a plan to vote before or on Election Day.

People with learning disabilities face stigma, low expectations and lack of understanding, but advocates stress that they still have a right to vote.

“People with disabilities need to have their voices heard. Just like any other minority group in this country, they have a right to vote,” said Quinn Bradlee with the National Center for Learning Disabilities.

Bradlee has attention deficit hyperactivity disorder, or ADHD, dyslexia and a rare condition that includes a wide range of physical ailments and learning disabilities. He founded Friends of Quinn, an online community offering support for young adults with learning differences.

“Just imagine if all 62.7 million eligible voters with disabilities voted. It would just be an amazing outcome,” Bradlee said.

Bradlee, the son of the late Washington Post executive editor Ben Bradlee and journalist Sally Quinn, is concerned about the potential impact on voting that pandemic-related complications and constantly changing situations could cause.

He initially planned to vote by mail, but now intends to vote in person in D.C. “Because I really don’t want to take a chance on my vote getting lost in the mail in the United States Postal Service, or it could just be confusing,” Bradlee said.

Given all the attention to mail-in voting during this election year and the pandemic, it may seem like it’s a relatively new issue. But it actually goes back to the Civil War. You can find more information on mail-in voting in WTOP’s “FAQ: What you need to know about mail-in voting.”

Election officials in D.C., Maryland and Virginia have taken steps to ensure that people who opt to vote in person can do it safely. These measures include adhering to health and safety guidelines recommended by health officials.

For people with learning disabilities who want to cast their ballots in person, “It would be wonderful if you took somebody to help you vote — a friend, a parent, a family member,” just to help guide you through the process, Bradlee said. “You obviously can make your own decision.”

He offered the caveat that people with underlying health conditions remain safe at home by voting remotely. 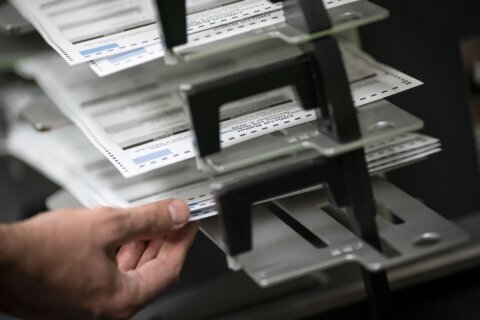