Police are investigating and environmentalists are crying foul after hundreds of tires were found dumped off of D.C. Route 295 in a wooded section of Anacostia Park in Southeast.
Listen now to WTOP News WTOP.com | Alexa | Google Home | WTOP App | 103.5 FM
(1/3) 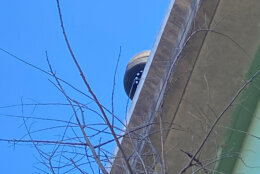 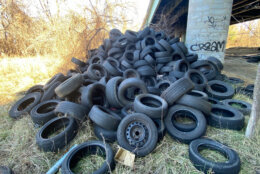 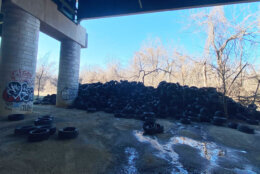 Police are investigating and environmentalists are crying foul after hundreds of tires were found dumped off D.C. Route 295 in a wooded section of Anacostia Park in Southeast.

The tires were discovered more than a week ago by Nathan Harrington, who runs the group Ward 8 Woods. They were in that area recently with other local conservation groups when he saw what he could only describe as “a mountain of tires.”

“This was actually dropped from the elevated portion of 295 about 50 feet down into a forested area of the park,” said Harrington. “And you can tell that that’s how it got there because there are tires that are still on the jersey barrier up above.”

D.C. police say they’re working in concert with the U.S. Park Police to investigate how the tires got there. No suspects have been announced in the case.

“It’s part of a larger pattern of environmental racism and neglect,” said Harrington, who lamented the toxins those tires will release into the soil and water as they break down over time. He said abandoned tires also collect stagnant water, which can become a breeding ground for mosquitoes during the summer.

“A lot of illegal dumping happens in neighborhoods east of the river because people know they can get away with it,” Harrington said. “Word is out that there’s a lack of enforcement.”

He added enforcement on these type of violations tend to be reactive, instead of proactive.

“By relying on residents to take the initiative to enforce our laws, they end up reproducing a lot of inequality,” he said.

Harrington, who lives in Congress Heights, said the city would never let something like this happen in wealthier, whiter sections of the city, like Rock Creek Park. He said in areas such as Anacostia Park, 311 calls seem to be ignored far easier.

WTOP has reached out to D.C.’s Department of Energy and the Environment for comment.