After hearing the news of the death of Queen Elizabeth II, those in the D.C. region who were fortunate enough to meet Britain's longest-reigning monarch during her handful of visits to the nation’s capital recalled their most memorable moments.
Listen now to WTOP News WTOP.com | Alexa | Google Home | WTOP App | 103.5 FM
(1/6) 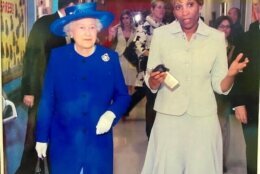 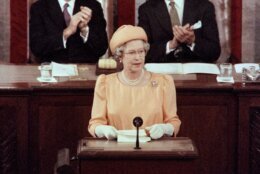 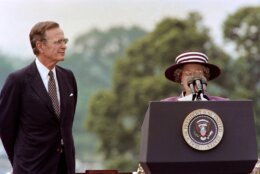 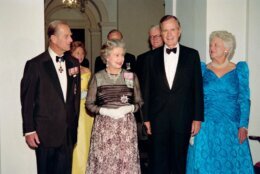 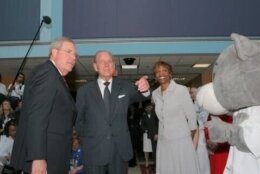 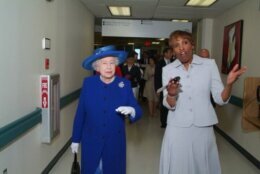 After hearing the news of the death of Queen Elizabeth II, those in the D.C. region who were fortunate enough to meet Britain’s longest-reigning monarch during her handful of visits to the nation’s capital recalled their most memorable moments.

Jacqueline Bowens, who leads the District of Columbia Hospital Association, worked at Children’s National Hospital in spring 2007 and had the tough task of organizing a royal tour for the queen during her visit to America in May that year.

“We got (outreach) from the British Embassy and the White House simultaneously, saying that we were among the places that the Queen and Prince Philip were interested in,” Bowens said.

As executive vice president for Government External Affairs at Children’s National, Bowens handled many high-profile visits. This one, however, involved a lot more preparation than the others, coaching sessions on how you greet and act and what to expect from Prince Phillip.

“We were told that Prince Philip had a certain style, and so don’t take offense because he could be a little snippy,” Bowens said.

‘She made us all feel comfortable’

Then came the big day, May 8, 2007, and Bowens greeted the royal couple, who were accompanied by former first lady Laura Bush.

“We shook hands and, maybe not even two minutes into the greeting, Prince Philip said, ‘Who’s in charge here?’ And so, I gingerly raise my hand. And he says, ‘Well then, get on with it!’ And so, you know, I stood at attention, and we got on with it,” Bowens recalled with a laugh.

Bowens recalled that Prince Philip wanted to forgo the tour and instead spend time speaking with researchers at the hospital. So while he met with them, Bowens escorted the monarch and the first lady through the facility.

“She engaged with me, and she would ask me questions, extremely engaging and polite,” Bowens remembered of her first impression of the queen.

Looking back, Bowens said that was the case even though she unknowingly was breaking “Royal Protocol” by many times touching the queen’s shoulder as she guided her from place to place.

“​​I found out years later, with all the brouhaha with Michelle Obama, that you’re not supposed to touch her. But they never told me I wasn’t supposed to do that,” Bowens said, referencing when former first lady Michelle Obama made headlines for putting her arm around the queen in 2009.

Bowens would take the queen to parts of the hospital, where excited children and their parents awaited the queen’s arrival. One of Bowen’s fondest memories was in the cardiology wing, where children were prepared to give gifts to the queen and the first lady.

For the first child, the queen accepted the gift handed to her and thanked the child, but the second young man wasn’t as willing to hand his present over to the queen, according to Bowens.

“There’s like this little tug-of-war with the gift, and the child finally says it’s for Mrs. Bush, and the queen just burst into laughter, the mom is just like devastated because her kid won’t let go,” Bowens said.

Bowens said that while most of the children, many of whom were very young, the experience for them was like somebody’s grandmother was visiting. For parents, on the other hand, Bowens said they were “over the moon!”

Throughout the visit, Bowens said the queen made everyone feel at ease.

“There was no kind of standoffishness. So, everybody — she made us all feel comfortable. So to the point that I think we all forgot she was the Queen of England,” Bowens said.

The tour would end with Prince Phillip rejoining his wife to continue their visit to the United States.

Hearing the news of the queen’s death, Bowens said her condolences go out to the royal family.

“I’m just grateful to be able to have that moment that I will treasure for the rest of my life,” she said.

Mary Coffman, of Santa Fe, New Mexico, was a journalist at the time in the District. During that visit, she received an invitation to greet the queen.

“It said the reception was intended as an informal social occasion, and guests are reminded that conversation at the reception is regarded as private, entirely off the record and not for use in the media,” Coffman read from the invitation she still has in her possession.

Coffman said the ground rules are the reason she doesn’t have a picture from the meeting, but she recalls being handed a calling card and told to stand in a line to greet Queen Elizabeth II.

“I do remember being thrilled, and my knees were shaking when I met the queen so that — I can confess to that,” Coffman laughed, while remembering.

She said while the meeting was brief, she, like Bowens, remembered the queen being very kind and “down-to-earth.”

Coffman also expressed her sadness about the news of the queen’s passing.