Gun violence on DC residents’ minds on National Night Out

"We have a lot of young families here and a lot of good people who have been here for years and years and years; and yet this is unacceptable."
Listen now to WTOP News WTOP.com | Alexa | Google Home | WTOP App | 103.5 FM

Some of the District’s top public safety leaders led a National Night Out in Northeast D.C. Tuesday night.

The annual event, which had been curtailed by COVID-19 in the last few years, unfolded in Lincoln Park, bringing together police and neighbors to promote safer neighborhoods.

But some of the neighbors who showed up were all too familiar with the frightening reality of gun violence in neighborhoods across the city.

While officials, including Ward 6 Council member Charles Allen, who is the chair of the Council’s Committee on the Judiciary and Public Safety, spoke from a stage, renewing the commitment to safer neighborhoods, a resident attending Night Out recalled the horrors of life punctuated by illegal gunfire.

“I had just put my young kids to bed and was in the living room with my husband. We heard about 40 shots; it sounded like. We immediately hit the floor because it sounded really, really close by,” said Christen McConnell of the Monday night shooting in the 1500 block of F Street NE, not far from her home. 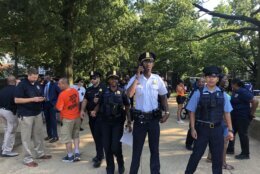 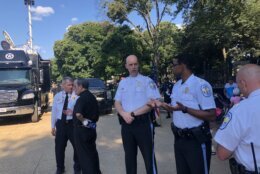 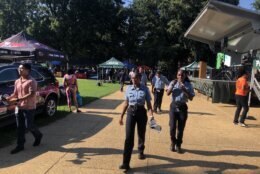 McConnell and her family are no strangers to the sound of the illegal gunfire in the city.

“This is the fourth time I’ve called 911 for gunshots within a one-block radius of my house in 2022,” McConnell said.

The U.S. Attorney for the District of Columbia promised the Night Out crowd that he would do his utmost to combat gun violence.

“As someone who has lived in the District for over 20 years and is raising a family here, I am deeply, personally invested in keeping our community safe,” U.S. Attorney Matthew Graves said.

But residents frightened by the gun violence insist that more could be done to rein in illegal guns.

Concerned about the safety of her children and grandchildren, she said that violent criminals taken to court are quickly returned to the streets.

“There’s a plethora of levels of brokenness,” the resident said.

McConnell said a parade of different detectives were at her doorstep after each shooting she reported in her neighborhood. However, she added that police should improve communications with residents, and the city should mount a more unified battle against gun crime.

“There was a murder of a 16-year-old on my block in March. I haven’t heard of any arrests happening in that case,” McConnell said. “We haven’t heard anything … I’m struggling for there to be a comprehensive approach to gun violence in this neighborhood.