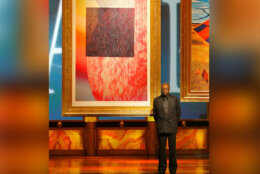 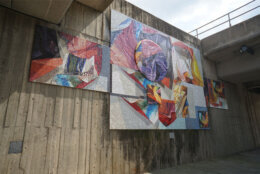 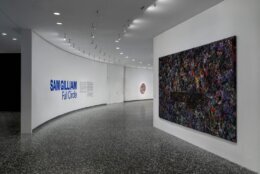 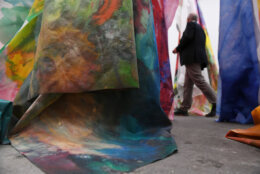 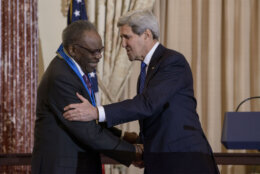 Gilliam was one of the artists associated with the Washington Color School, which was a movement initiated in D.C. in the 1950s that featured large fields of color as a response to the Abstract Expressionist works that emerged from the New York School, according to a statement from The Pace Gallery.

“Sam Gilliam was one of the giants of Modernism,” said Arne Glimcher, American art dealer and founder of The Pace Gallery. “He was a great friend and great artist who was able to convey the shared torments and triumphs of life through the universal language of abstraction. Sam was very much acclaimed in the 60s and 70s for his revolutionary work that freed the canvas from its support.”

Gilliam was born in Tupelo, Mississippi, in 1933 and became known by the creation of his signature beveled-edge and Drape paintings in the mid- to late 1960s, according to The Pace Gallery.

He folded canvas before staining it with acrylic paint to create dimensional abstractions, which were then stretched across beveled frames, according to the gallery.

He suspended his stained canvases from ceilings and walls and represented the United States at the Venice Biennale in 1972 as part of a group presentation organized by Walter Hopps.

A piece of Gilliam’s public artwork is also a part of the D.C. Metro. The huge glass mosaic “From a Model to a Rainbow” was installed at the Takoma Metro Station in 2011.

Just last month, an exhibition of his work opened at the Hirshhorn Museum. “Sam Gilliam: Full Circle” shows Gilliam’s “most recent works in recognition of his indefatigable vision,” the museum said, and are presented “in his chosen hometown” of D.C.

On Monday, Melissa Chiu, director of the Hirshhorn Museum and Sculpture Garden, offered a reflection on his passing.

“The Hirshhorn mourns the death of Sam Gilliam, whose unrelenting investigation of color, form and material authored an original visual language,” Chiu said. “Gilliam’s breakthroughs, notably his Drape series, catapulted painting and sculpture traditions rooted in the early Renaissance into the twenty-first century.”

“Sam Gilliam: Full Circle” is on view at the Hirshhorn Museum and Sculpture Garden in D.C. through Sept. 11.