Travelers arriving in D.C. tell WTOP that they were stuck waiting to get off planes at the Reagan National Airport for hours Monday morning.
Listen now to WTOP News WTOP.com | Alexa | Google Home | WTOP App | 103.5 FM
(1/3) 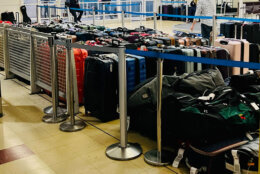 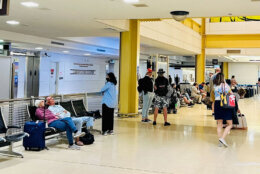 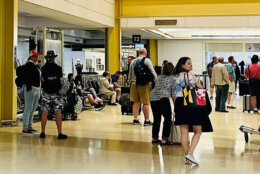 After a weekend of storms, Reagan National Airport in Arlington, Virginia, has the most cancellations and delays of any airport in the country Monday morning, according to FlightAware.com.

The airport had 90 cancellations and 71 delays Monday morning, with the numbers growing throughout the day.

It’s likely many flights were delayed because of poor conditions during Sunday night’s thunderstorms along the East Coast.

But even after arriving at Reagan, hundreds of travelers were stuck waiting on the tarmac.

Dozens of people took to Twitter to vent frustration over sitting on planes for three or four hours overnight waiting for an available gate.

Final update: we arrived in DC at 12 am. At 4:45 a.m. @Reagan_Airport was “able” to make a gate available to us. To @AmericanAir do better this could have been avoided and should never have happened.

Some travelers said airline staff blamed low staffing and weather, making it difficult to keep gates open. Others chalked it up to poor management and planning.

American Airlines replied to tweets online about the issue, apologizing for delays and telling travelers that the airline is working to find available gates for the planes.

“Last night’s strong thunderstorms in the Washington, DC area impacted our operations at DCA. A small number of arriving flights experienced deplaning delays as they waited for available gates at the terminal. We apologize to our customers for the inconvenience and thank our team members who are working diligently to resolve the situation,” Timothy Wetzel, a spokesman for the airlines, said in an email to WTOP.

Robert Yingling, a spokesman for Metropolitan Washington Airports Authority, told WTOP the delays weren’t on their side of things at security checkpoints.

“Aside from weather, I’m not aware of any factors that could have affected flights to/from DCA. There are no issues with the checkpoints,” Yingling said in an email to WTOP.

Nathan Mellor said he landed in D.C. on an American Airlines flight from Ohio around 11:55 p.m., but couldn’t get off the plane until more than three hours later around 3:15 a.m. He said airline staff told him there weren’t enough gates for planes.

“There was two occasions where we were told we were going to be the next plane to come to a gate,” Mellor told WTOP. “And then 20 minutes later, we would get an update that another plane actually got to that gate and they had been sitting longer than us.”

Lisa Klein flew in from Detroit and waited around five hours to get off her American Airlines flight. While waiting, Klein said she saw seven planes around her, all American Airlines, also waiting for gates.

“Why do you fly a plane someplace you have no place to put it? Especially when you have this many outrageous just cancel the flight,” Klein said.

While she said the staff on her flight was great, she said it was an “outrageous mismanagement.”

Both Klein and Mellor questioned why the airline wouldn’t shuttle passengers in buses if the gates were occupied.

Deion Calhoun’s flight in Birmingham, Alabama, was scheduled for 5:35 p.m. Sunday, but didn’t take off until roughly 9:35 p.m. It landed in D.C. just after midnight and he waited to deplane until nearly 4:30 a.m.

With all of the delays, Calhoun had three hours after deplaning before he had to be at work.

“I’m understanding, but I feel like it could have been handled better,” Calhoun said. “This isn’t the first time rain has came to D.C.”