Rolling to Remember brings thousands to DC to honor, advocate for veterans

If you heard thunder in D.C. this weekend, it may have been the return of Rolling to Remember: a massive event, bringing tens of thousands together to advocate for veterans.
Listen now to WTOP News WTOP.com | Alexa | Google Home | WTOP App | 103.5 FM
(1/3) 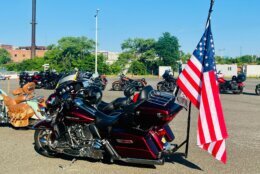 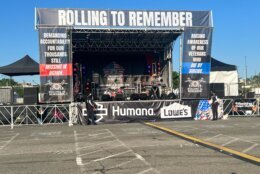 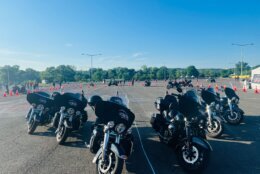 If you heard thunder in D.C. this weekend, it may have been the return of Rolling to Remember: a massive event, bringing tens of thousands together to advocate for veterans.

“They’re coming together with the purpose of raising awareness for our prisoners of war,” Joe Chenelly, AMVETS national executive director, told WTOP.

Jerome Bryant, a veteran who rode with the Christian Motorcyclist Association, spoke with WTOP’s Acacia James about the significance of Rolling to Remember taking place around Memorial Day.

“It’s not the holiday that kicks off the summer,” said Bryant, who lives in Alexandria, Virginia. “It is the holiday and a time to remember those who have given the ultimate sacrifice.”

The group also wants to raise awareness about suicide rates among veterans: According to AMVETS, around 22 veterans die by suicide each day.

“The message will be clear throughout: We will never forget our POWs and MIAs, and we won’t stop fighting for real solutions to the suicide crisis,” AMVETS said in a statement.

Jim Chambers, a Marine veteran who rode on Sunday, told WTOP that those suicide numbers are likely conservative.

“A lot of people that die, (its) not recorded as a suicide because the families don’t want to have that stigma hanging over them, and that loved one’s life, let alone their military service,” Chambers said.

Events for Rolling to Remember began Friday with a bike blessing ceremony held at the Washington National Cathedral followed by a candlelight vigil at the National Vietnam War Memorial that evening.

On Saturday at RFK Stadium, there was a rally with Jon Stewart and other special guests  to raise awareness for veterans — as well as an attempt at a Guinness world record for the largest number of people doing pushups together.

“Our country made the promise long ago that we will leave no one behind,” Chenelly said in a statement.

“Our voices and our motorcycles will be heard as we ride to ensure our fellow Americans and our government remember that promise. We must do more to find and identify the more than 80,000 U.S. military men and women who are still missing in action.”

WTOP’s Melissa Howell and Acacia James contributed to this report.