"What if the avenue was elevated to a signature venue for spectacular events, a place where all are welcome, uplifted and inspired?" the Pennsylvania Avenue Initiative posits.
Listen now to WTOP News WTOP.com | Alexa | Google Home | WTOP App | 103.5 FM
(1/3) 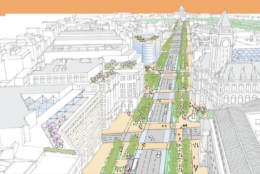 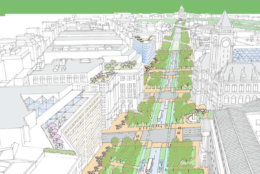 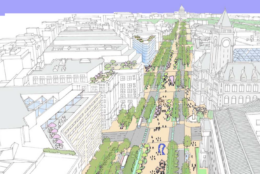 One of America’s most famous roadways could be in for a makeover: Urban planners want to re-imagine downtown D.C.’s Pennsylvania Avenue as a signature outdoor venue, emphasizing people over cars and expanding park space between the White House and the U.S. Capitol.

“What if the avenue was elevated to a signature venue for spectacular events, a place where all are welcome, uplifted and inspired?” the Pennsylvania Avenue Initiative posits. The project puts forward three concepts of what the 1.2-mile thoroughfare’s future could look like, and is seeking public input on its next steps.

The three visions deal with different approaches to balancing pedestrian needs, recreational space and vehicle traffic, citing a 2018 D.C. transportation study that found up to 20 feet of the avenue’s current lanes could be allocated to other uses while preserving an “acceptable” level of service for vehicles.

The least drastic Urban Capital concept would expand existing sidewalks while keeping much of today’s traffic pattern in place.

The Linear Green proposal would transform wide swathes of Pennsylvania Avenue into a curb-less pedestrian park with winding footpaths and large lawns, leaving a vestige of the roadway at its center for public transit and bike use.

The Civic Stage plan, meanwhile, would bisect the avenue with a mile-long central pedestrian promenade running its entire length, flanked on both sides by a combination of narrower travel and bike lanes.

“We can reallocate space within the right of way to offer better transportation options for pedestrians, bikes and transit, and devote a little less space to cars,” Elizabeth Miller, physical planning director at the National Capital Planning Commission, said during a presentation outlining the three concepts on Tuesday.

Planners also identified three popular public spaces along Pennsylvania Avenue, roughly correlating to the areas around Freedom Plaza, the Navy Memorial and John Marshall Park, that would be expanded under each proposal “to encourage a range of plaza and park-related activities with retail services and amenities.”

Public comment on the three ideas is open online until July 13. Concept art and maps of the proposals can be found on the initiative’s website.

What is the ‘great replacement theory’ cited by the accused Buffalo shooter?