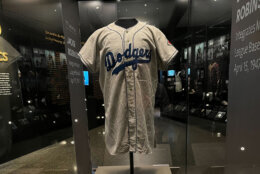 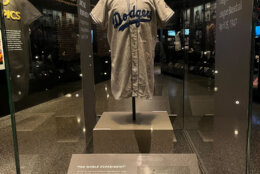 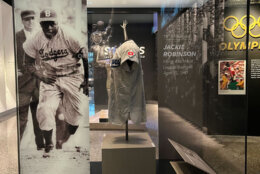 The Smithsonian’s National Museum of African American History and Culture is commemorating the 75th anniversary of Jackie Robinson’s historic Major League Baseball debut with a special exhibit displaying one of the few remaining jerseys belonging to the baseball legend.

On April 15, 1947, Robinson made his Major League debut with the Brooklyn Dodgers, becoming the first African American to play in the league and breaking a long standing color barrier in the sport.

The jersey, on display on the third floor of the museum, is a Dodgers road jersey from 1951 and comes from a private collector. It is one of about five known Robinson jerseys.

“This was a moment when all of the nation was watching to see how Jackie Robinson performed, to see how he was accepted by his teammates, and also the wider public,” Thomas told WTOP.

Despite his many successes, Robinson faced racial discrimination throughout his career both on and off the field.

Robinson’s integration of “America’s pastime” had much greater implications beyond the sport, serving as a model of integration in other areas of American life.

“He was someone who demonstrated that nonviolent, direct action was a viable strategy and can help change the hearts and minds of people who are opposed to integration,” Thomas said.

Robinson’s jersey will be on view in the museum’s “Sports: Leveling the Playing Field” gallery until May 1.

The museum is open seven days a week from 10 a.m. to 5:30 p.m. Free timed-entry passes are required for entry.