With bright costumes and a lot of energy, the Carpathia Folk Dance Ensemble showed off its moves in a performance to raise funds for Ukraine.
Listen now to WTOP News WTOP.com | Alexa | Google Home | WTOP App | 103.5 FM
(1/4) 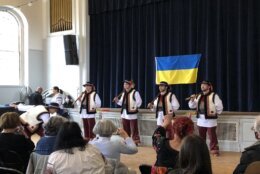 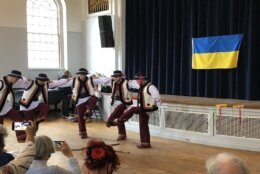 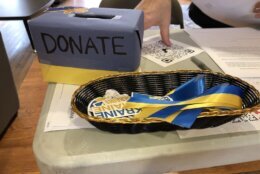 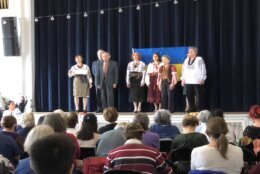 With bright costumes and a lot of energy, the Carpathia Folk Dance Ensemble showed off its moves in a concert to raise funds for Ukraine.

At the All Souls Church Unitarian in D.C., the group performed for a sold out show it called Dancing to #StandWithUkraine.

“As soon as the war broke out in Ukraine, we knew that we needed to find a way to help,” said Wesley Reisser, director and founder of the group.

This was the final of three shows the group performed in the area over the last few weeks. So far, the group has raised more than $24,000 in donations to help support World Central Kitchen and the Catholic charity Caritas in their Ukrainian relief work.

In addition to the Carpathia Folk Dance Ensemble, this event included performances by Ukrainian a cappella group SPIV-Zhyttya and the Tisza Ensemble.

“The enthusiasm of the crowds have been incredible. We’ve had standing ovations all these shows,” Reisser said.

Group member Yaryna Onufrey was raised in the U.S., but her mother is from Ukraine and her dad’s parents emigrated to the U.S.  after World War II. She was grateful to be able to support the Ukrainian cause.

“The outpouring of support has been nothing short of incredible,” Onufrey said.

In Annapolis, Maryland, teens raised over $8,000 for Ukraine in a live streamed concert.

Cathy Lamonte, founder and artistic director of Hungarian dance group Tisza Ensemble, said that while the group is celebrating its 40th anniversary this year, events like this have been a great way to celebrate and raise money for those who need it most.

“We’ve had sold out audiences in every one of our Ukraine Shows, and it’s just very heartwarming,” Lamonte said.

Reisser said their sold out shows have been great. Not just for the boost in fundraising, but for the opportunity to educate people about folk dancing.

“I think a lot of people, when they think of folk dance, they think that it’s kind of dorky or boring,” Reisser said. “But Ukrainian dancing is really exciting. It has a lot of lifts, the guys squat on the ground and do kicks, lots of fast, amazing spins, beautiful, colorful costumes.”