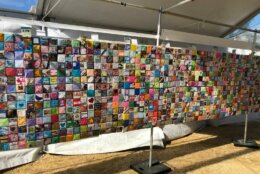 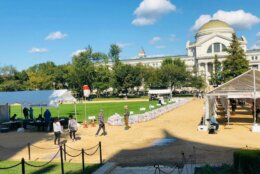 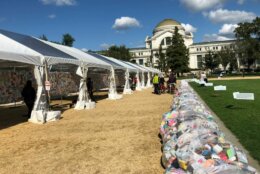 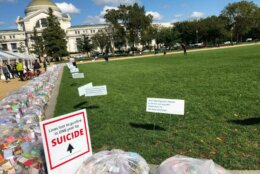 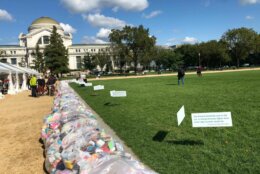 This weekend 200,000 hand-folded origami boxes were displayed on the National Mall, each representing a person killed by gun violence.

“I started the Soul Box Project in 2017 after the Las Vegas shooting because I was so shocked by that, that I went and looked at statistics about gun violence and the numbers were so huge that I just thought nobody can grasp these kinds of numbers.”

Lee felt the need to show the numbers in a visual way.

“Our brains aren’t designed that way, but they are designed to understand numbers when you see them with a physical object,” Lee said.

The handcrafted boxes are called “soul boxes” because they represent lives lost.

“That’s what we’re calling attention to, you know, is the essence — the essence of people that we’ve lost or have been injured or traumatized,” Lee said.

The origami boxes are easy to make, small and inexpensive. She said that while not everyone is willing to march in the streets or sit through legislative sessions, many were happy to participate in this project.

“People responded! People were just so eager to do something about this,” she said.

Lee lives in Oregon and has never been a victim of gun violence and does not know anyone affected by gun violence.

“I’m very privileged to live in a bubble, but I think it’s important for people who are survivors, who are suffering to know that the rest of the country cares,” said Lee.

She said she was surprised by the healing that came from the project.

“When we watch people going through the exhibit responding I feel like this has the possibility to really do that and it needs to tour. It needs to be exhibited throughout the country. It needs to go on for a long time,” she said.

Her goal is to touch people with the exhibit so that they are motivated to take action.

“You need to enter through the heart because that’s where the action starts,” Lee said.