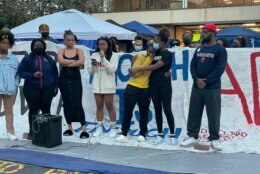 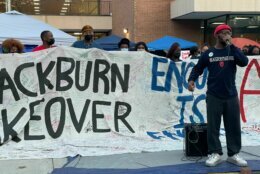 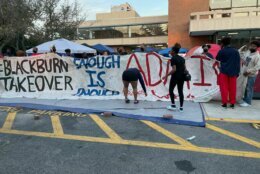 Howard University students are nearing their third week of protests at the Blackburn University Center with cold weather and rain approaching the tents that students have transformed into a home.

More than 12 days before #BlackburnTakeover began taking root on the Northwest D.C. campus and across social media, students were active online with complaints of mold, health issues and limited resources.

On Sunday, protesters said that they will only talk to President Wayne A.I. Frederick and Howard University’s Board of Trustees, blocking attempts by the school’s vice president for student affairs Cynthia Evers to negotiate.

“Our demands are not demanding,” a student organizer said. “We do not believe that we are asking for much when we ask to have a conversation with President Wayne Frederick.”

Protesters called a news conference after an email to administrators Sunday afternoon went unanswered. Students alleged that the administration intentionally blocked a view of their protest by reversing their decision to cancel Yard Fest.

Throughout the day, alumni pointed to a letter by one Howard University graduate student, joining voices questioning if they have “had enough of that with the gaslighting emails from the VP of Student Affairs and the President of the University.”

The letter alleged that a housing service, Corvias, may be at fault for issues in the dorms. The student’s letter cites several concerns, including a letter from Sen. Elizabeth Warren and Rep. Rashida Talib that accused Corvias of putting profits ahead of public health during the pandemic.

However, the letter said that a private meeting with President Frederick could not “explain that information pertaining to their partnership with Corvias.” The student added that efforts were being made to remove mold.

Those efforts followed stories of students who experienced COVID-like symptoms and “coughing up blood,” due to increasing mold in their living spaces.

“Again, all we asked for was for President Frederick himself, for the board of trustees, to come and talk to the students who they represent,” another student said. “And tell us why, how, when and what solutions they have for us breathing mold. And you tell me that I’m gonna get expelled?”

Organizers said their fight also included a focus on academic immunity after the school allegedly turned off access to campus internet in the area around the center. This allegation, however, may have more to do with the recent ransomware attack as officials confirmed a lack of stable internet across campus in mid-September.

This was just days after Aniyah Vines, a senior and founder of The Live Movement, reported that campus officials pulled a fire alarm to force students out of the building they occupied.

Alumni voiced concerns from their years at Howard, citing the college’s ability to avoid issues by “waiting students out.” Several added that some issues are years old and that protests have fallen up short in recent history, though there have been successes the decades before their time.

“We’re not the old Howard,” an organizer said in response to these concerns.

Other students, driven to tears, recalled a physical encounter with the Howard University campus police captured on video.

“I am a Black girl at a Black college,” she said. “I came to this HBCU to escape the oppression of the world. And here I am being physically hurt at a peaceful protest.”

The HBCU released statements on the protest and plans to respond to housing problems. However, students said that prior statements, including emails that threatened students with consequences including expulsion, were far more concerning.

Students speaking to advocates and members of the press said they would rather endure bad weather with the support of their community than remain in housing that posed a health risk.

The university boasted an approximate enrollment of 9,689 students and said that it worked on creating emergency housing opportunities for the campus. Students highlighted that these options don’t aid impacted juniors and seniors who have continued to seek housing, “if they’re lucky they don’t have to sleep in their car.”

They have also continued to encourage an increase in security for those who are at Blackburn University Center, ending several events with calls for men to assist with their security efforts.