A community comes together to expand an important DC urban garden

It only occupies a small open area near Allen Chapel AME Church in Southeast D.C., but a newly expanded urban garden is having a big impact on the community it serves.
Listen now to WTOP News WTOP.com | Alexa | Google Home | WTOP App | 103.5 FM
(1/4) 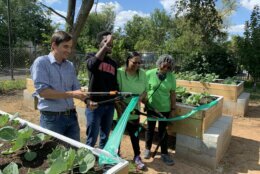 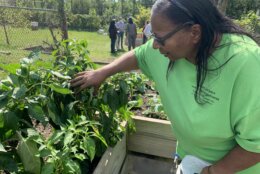 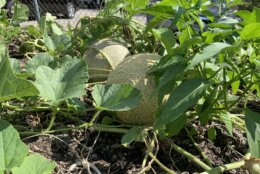 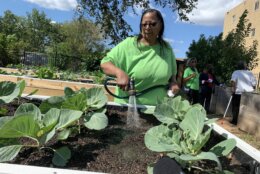 It only occupies a small open area near Allen Chapel AME Church in Southeast D.C., but a newly expanded urban garden is having a big impact on the community it serves.

“We provide food for anybody who needs food; we don’t ask them any questions,” said Velma Speight, Executive Director of the church’s McKinley Crudup Outreach Center.

The garden has been up and running for sometime, but over the past few months, some area college students and community organizations came together to help expand the garden so that more free produce can go out to people in need. It now includes several new raised garden beds which are growing everything from hot peppers to kale.

The plot is one of seven urban plots in D.C. sponsored by 11th Street Bridge Park. The projects director Scott Kratz said the goal of the urban plots like this, is to help underserved communities, such as Ward 8, which is in a place grocery store access is limited.

“We have one grocery store serving 75,000 residents here in the ward, compared to 13 grocery stores in Ward 6 serving the same number of people,” Kratz said.

Kratz spearheaded the expansion of the garden, which has been in existence for four years. The project took some planning, because the goal was to not only create the new planting area, but to also make maintaining it easier for the many senior citizens who both use and maintain the space.

The designing of the new raised beds was handed off to a group of Howard University Engineering students.

“The challenge for them was: Can you design, create and construct raised beds, for seniors that don’t have to bend down, because that has an enormous amount of pressure on your back,” Kratz said.

The students, the group Engineers without Borders and Clark Construction among others, rose to the challenge of making the new beds a reality, according to Kratz.

Using concrete blocks and wood, the design team came up with a concept that would support raised beds that are almost 40-inches-tall.

Howard University Student Cheikh Badiane said for the past several months they worked to design the garden, and he said it was a special feeling to see it take shape.

“Honestly, the most euphoric feeling I’ve had all year,” Badiane said.

Speight said through July and before the expansion, the garden grew a couple hundred pounds of produce. With the new expanded plot, she expects to grow 600 pounds of food this season.

“We’re just so appreciative to everybody who has supported us,” Spieght said.

The beds may have opened last week, but the work for the engineering team isn’t done. In the coming months, the plan is to add safety rails and ramps to make the site more accessible for the many volunteers who help to maintain the plot. They also are designing an irrigation system that can be used to keep the many plants watered.

“It gives you a piece of mind, to see something grow from nothing and then be able to give it to somebody where there are no chemicals,” said Leslie Haywood, the assistant executive director of the McKinley Crudup Outreach Center.