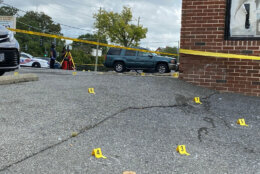 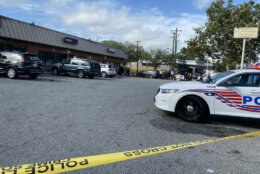 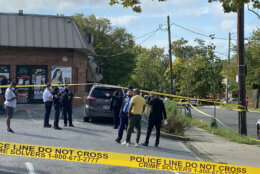 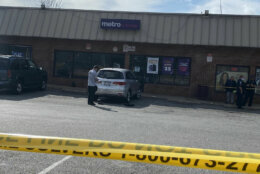 Five people, including a 13-year-old boy, were wounded Tuesday morning when a gunman opened fire on a group of people in front of a Southeast D.C. convenience store, D.C. police said.

The shooting happened shortly after 8:30 a.m. in front of a store on Alabama Avenue near Suitland Parkway.

In addition to the teen, two men and two women were wounded in the shooting. Most had gunshot wounds to the lower body, but one of the men was shot in the chest and was in critical but stable condition, police said.

The suspect is still on the loose, police said. Later Tuesday afternoon, police released photos of the suspected gunman appearing to show the moments before and after he fired on the group.

MPD seeks the public’s assistance in locating a suspect in reference to an Assault with Intent to Kill offense that occurred this morning on Alabama Avenue that injured 5 individuals.

John Branch, the commander of the Seventh District, said police aren’t sure if anyone was targeted in the shooting but that police “definitely believe some of the victims were just caught in a spray” of bullets.

“People can’t just enjoy going to school, walking on the street, walking their dog without fear of being shot at,” Branch said. “It’s sad.”

“I don’t care what ward you live in, in our city — if someone brazenly fires into a crowd of people, striking five innocent people in this instance, that’s unacceptable,” Contee said.

Three of the wounded were taken to the hospital from the scene by ambulance. One of the men and the teen showed up at the hospital separately, police said.

Below is a map showing the general location of the shooting:

WTOP’s John Domen and Andrew Alsbrooks contributed to this report.