Eight days after the drive-by shooting that took the life of 6-year-old Nyiah Courtney and wounded five others, community leaders are calling for action.

One hundred Black fathers, uncles, brothers and sons marched around Martin Luther King Jr. and Malcolm X avenues, where Nyiah and her mother were gunned down, with a strong message for listeners: “There is no honor in protecting murderers.”

The “street code” or “code of silence” is an unwritten rule that discourages community members from reporting crimes to police. The strained relationship between law enforcement and communities of color makes the rule a difficult one to break. Activists are urging residents to hold themselves accountable.

“When you got people in our community, killing Black people, you need to tell it,” one activist who attended the march told WTOP’s news partners at NBC Washington.

Residents were also connected with some of the workforce development programs at the University of the District of Columbia.

“I often hear ‘we didn’t know about this’ or ‘no one ever tells us’ so I want to bridge that gap,” said Salim Adofo, the chairperson for Advisory Neighborhoods Commission 8C.

He says Saturday’s event will have lasting effects on residents as volunteers continue the work of creating more access and bringing up role models.

“People don’t join organizations, they join people, so if we have brothers that are out there doing great things, then they’ll start to come out and want to engage more,” he said.

Adofo said the plan is to get back out into the community next weekend.

Volunteers marched door-to-door and met the residents face-to-face, handing out flyers on gun violence and community resources for food, finances and mental health. Adolfo said it’s an effort to rebuild the relationships between neighbors.

“We’ve been in the pandemic for that last year-and-a-half about this point, and we want to move out of the digital space and talk to people and build that relationship and get back to being an actual neighborhood and know your neighbors,” he said.

As the search for Nyiah’s killer continues, community leaders encourage anyone with information to contact the Metropolitan Police Department at 202-727-9099.

Anonymous information can be submitted to the department’s TEXT TIP LINE by sending a text message to 50411.

A total reward of $60,000 is being offered to anyone with information leading to the arrest and conviction of the suspects. 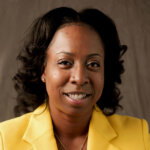 Monique Blyther is a Telly Award-winning video journalist with more than 20 years of experience in digital media production. She graduated from George Mason University with a bachelor's degree in journalism, and studied digital marketing at Georgetown University.