FATHER'S DAY : Father's Day Guide | DC heat emergency on Father's day | Gifts & meals for dad | Clinician's advice on coping with death of a father | Wine ideas for dad
Home » Washington, DC News » 'We are up to… 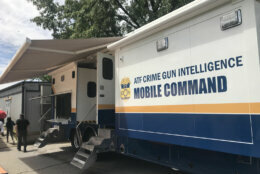 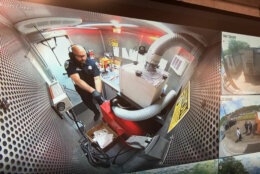 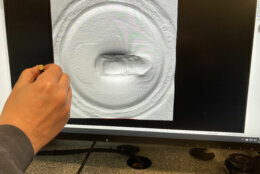 Within days of the D.C. crime lab having its accreditation to perform forensic testing suspended last month amid an ongoing investigation, the Bureau of Alcohol, Tobacco, Firearms and Explosives says it stepped into action, hauling a massive one-of-a-kind mobile lab to D.C. to help process gun evidence in the city.

The massive truck tucked away in a corner of the parking lot of the D.C. Police Training Academy in Southwest D.C. is outfitted with an armored room for test-firing seized guns and special equipment to capture high-definition images of shell casings, which are uploaded to a national database to search for potential matches.

It’s called the ATF Crime Gun Intelligence Mobile Command Center and while it’s outfitted with state-of-the-art technology, it’s a far cry from the $220 million headquarters of the Department of Forensic Sciences across town. Still, ATF says the unit is keeping pace with processing gun evidence collected at crime scenes across the city.

“We are up to speed,” said Christopher Amon, special assistant agent in charge for the ATF Washington Field Division in an interview with WTOP before providing a tour of the mobile lab. “There was only about a week lag time …. between the issues with DFS and the truck getting here to start getting that evidence flow, but we are currently up to date.”

The lab is staffed by five employees working five days a week and on-call personnel on the weekends, “in case there’s a critical incident.”

The loss of the D.C. lab’s accreditation April 2 halted most of the lab’s forensic testing work — not just the analysis of guns, but DNA, fingerprints and digital evidence also. On May 2, accreditation was withdrawn entirely amid an ongoing investigation into how lab managers responded to an error, but D.C. officials have said they plan to appeal the decision.

In the meantime, Amon said the ATF is keeping busy processing the gun cases the lab normally would have handled.

The sidelining of the lab came as the District has experienced a wave of gun violence in recent weeks. So far, homicides in D.C. are trending about 30% higher than this time last year.

“We’re connecting a lot of dots,” he said. “In the five weeks that we’ve been here, we’ve connected homicides to other homicides, to attempted homicides … There have already been links that we’re making in this truck that are making a difference.”

The loss of accreditation has added a few extra steps to the process before evidence is unpacked and analyzed. DFS’ Crime Scene Sciences division, which was never accredited in the first place, is unaffected by the current situation and can continue to collect evidence from crime scenes.

Evidence is checked into the lab’s Central Evidence Unit and then, D.C. police have to run it about 5 miles south from the lab’s headquarters to the mobile lab.

The ATF unit comes equipped with an armored room and special equipment to make test fires of submitted firearms. In addition, there’s a separate lab area where the casings from those test fires — as well as casings directly from crime scenes — are photographed with a device, about the size of a storage locker, with a high-definition camera that takes a picture of the casings, magnifying a part of the casing from the size of a small watch battery to the size of a dinner plate.

The images are uploaded to the National Integrated Ballistic Information Network, which scours its database of 45 million images. Similarities, indicating a potential match, are called leads and sent back to the lab for a closer look.

The turnaround time on very high-profile cases can be as quick as an hour, Amon said. In general, it’s closer to 24-48 hours.

“I think the important thing is the speed,” he said of the truck’s capabilities. “It’s important to get these shooters off the street and link these crimes. And what we can do in this truck gives us the capability to do that sometimes within 24 hours, and that’s important to get those leads in the hands of investigators as quickly as possible.”

As for how long the unit will be handling cases in D.C., Amon said that’s still unclear. He added, “But we’re here to support our partners for as long as needed.”