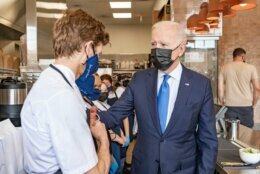 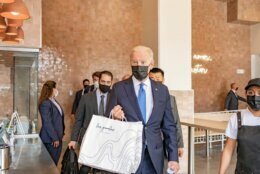 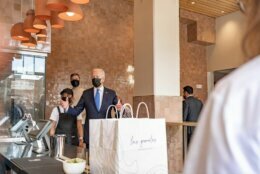 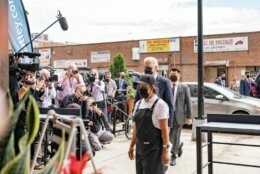 For the crew at Taqueria Las Gemelas in Northeast D.C., Wednesday morning was anything but normal — new or otherwise.

Initially, the restaurant was told that members of the Small Business Administration were going to stop by to promote the Restaurant Revitalization Fund. When the morning rolled around, though, it became clear that something else was going on: The area had become flooded with plainclothes Secret Service agents.

That’s when the secret was revealed: President Joe Biden was paying the restaurant a visit to pick up some Cinco de Mayo tacos and enchiladas.

Outside of the holiday, the president also dropped in to inform the restaurant’s owners that they were the first to be approved for the revitalization fund, in this case a $677,000 grant.

Co-owner Josh Phillips told WTOP that the pandemic’s effects on the restaurant were brutal — they were forced to lay off dozens of their staff, and revenues fell by seven figures in 2020.

The first round of Payment Protection Program loans helped to hire some of the staff back, and a ghost kitchen concept — a kind of virtual restaurant that uses an existing business to create a menu almost exclusively available through delivery — allowed them to claw back some of their revenue.

Still, things were not on solid ground financially.

One of the things Biden asked about during his visit was how the fund was going to affect the restaurant.

“I’m not gonna lie, it means a lot, and I started to tear up a little bit,” Phillips said of his conversation with the president. “I said ‘Mr. President, you have no idea what this means to our business.’ He looks at me and is like ‘I think I do know,’ and chuckled a little bit.”

Now, Phillips said he has the financial stability to give some workers a raise as soon as next week.

Phillips said he and the president discovered they have a connection through their hometown of Wilmington, Delaware.

“I actually grew up down the street from his house in Wilmington and went to school there,” Phillips said. “It turns out his granddaughter goes to the same school I went to … It was kind of nice to talk to someone like the president on such a personal level. I was like ‘small world.'”

Plus, Phillips said Biden’s visit created a lot of buzz for the restaurant the rest of the day and into Thursday. And almost everyone asked for the same thing.

“I’ll have what Joe had” was a common theme — Phillips said customer after customer wanted to buy the same meal Biden ordered.

And for those who are curious: “He got an al pastor taco, carnitas, barbacoa, lengua and then he got two quesadillas — one mushroom hongos and then chorizo and potato,” Phillips said.

The restaurant experienced a big bump in sales thanks to the presidential stop-in, Phillips said. Phillips said sales were well beyond what they had expected for Cinco de Mayo, and that the bump continued into Thursday.

“I can’t tell you the number of people who came saying they came because they saw the president there — that was probably almost the entire lunch crowd,” Phillips said.

He said the restaurant had prepared for Cinco de Mayo sales to be just below a typical Saturday — even accounting for the holiday — but instead they outperformed their best Saturday to date by several thousand dollars in sales.

“It was a very busy day,” Phillips said with a laugh. “An incredibly busy day.”