Those who received COVID-19 shots at the Kennedy Center in D.C. Thursday got more than inoculations, they also got to celebrate with a free beer.
Listen now to WTOP News WTOP.com | Alexa | Google Home | WTOP App | 103.5 FM
(1/6) 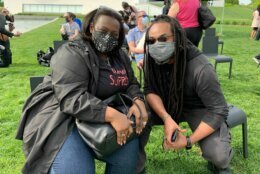 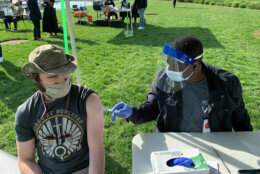 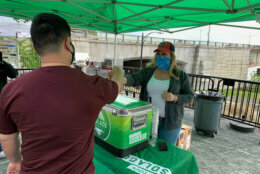 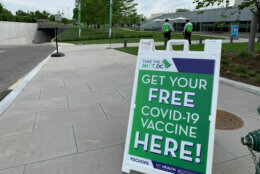 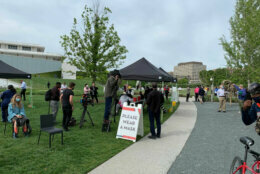 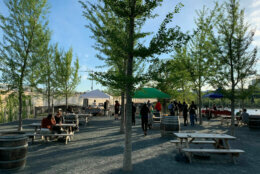 Those who received COVID-19 shots at the Kennedy Center in D.C. Thursday got more than inoculations, they also got to celebrate with a free beer.

At the Shot and a Beer pop-up vaccination event put on by DC Health, people received the single-shot Johnson & Johnson vaccine; and after rolling up their sleeves, they got a free beer provided by Solace Brewing Company.

“Always down for free beer so it doesn’t take much more than that to get me to come somewhere, and luckily they were giving out vaccines down here, too,” law student Jacob Nagy said.

Nagy said he was waiting to get the shot until after his exams due to concerns that he might not feel well in the days following.

Patrick Ashley, senior deputy director at DC Health, said not only does this offer another location for people to get vaccinated, it gives those waiting or on the fence another reason to come out.

“We know that individuals have different reasons to get vaccinations at different times, and we know different incentives work for different people,” Ashley said.

The event is especially geared toward younger individuals, some of whom may not feel they are susceptible to getting really sick from the virus.

“The reality is that we see young people that die or end in the hospital from COVID,” Ashley said, adding that the health department is encouraging people of all ages to get vaccinated.

As of Thursday, the city had administered more than 520,191 doses since shots began going into arms earlier this year, which accounts for 22.3% of residents being fully vaccinated.

Free beer wasn’t the only motivation for some others who chose to get their shot at the Reach, the Kennedy Center’s most recent addition.

Evan Hays, a soon-to-be-graduate at The George Washington University, said he wanted to get the one-dose shot so he could be ready to start a new job in a couple of weeks.

“When I saw that they were doing the J&J one again, I was really excited because it is going to make my life a lot easier,” Hays said.

Anna Russell, who is originally from Denmark but comes to D.C. for work, attended the event to get the shot. She spent the last 14 months overseas and just arrived back. Russell said her first priority was getting the shot since she couldn’t get one in Europe.

While she didn’t take the city up on the beer, she called it a unique offer.

“Only in America would they offer something as fantastic as beer as incentive to get vaccinated,” Russell said.

Semajh Daniels, of D.C., works at the Kennedy Center, but he came out to get the shot and free beer with his wife, Zora McCarthy.

“He lured me with beer,” McCarthy said of her husband’s plan to turn this into a date night.

Daniels called it the perfect way for both of them to get vaccinated.

“We got the shot; we had a beer; we walked along the river; picturesque D.C. What more could you ask for?” Daniels said.