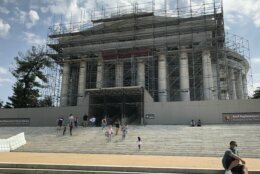 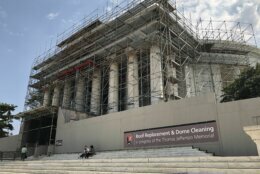 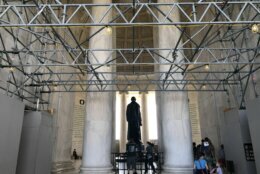 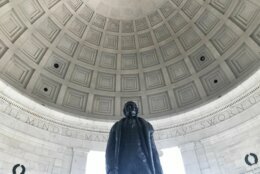 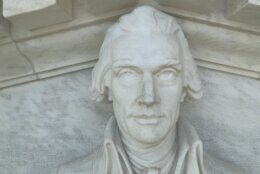 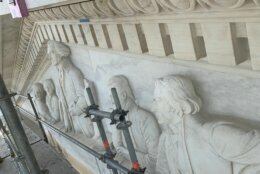 The marble dome of the Jefferson Memorial in D.C. is gleaming white once again, now that a dome cleaning and roof replacement project is almost done.

The work began in 2019, and the scaffolding that surrounds the memorial is expected to start coming down next week.

Since 2006, the dome has looked downright dirty. The cause was biofilm — a layer of microorganisms that had taken up residence on the stone.

“We used a combination of steam cleaning and laser treatment to get rid of the biofilm, hopefully for the near and distant future,” National Park Service spokesman Mike Litterst said.

Workers also replaced the 78-year-old memorial’s three roof systems: Two around the dome, and one on the portico above the memorial’s entrance.

“The roofs had failed prematurely, we were getting water in places we shouldn’t have, it was weakening the stone, so we’ve taken care of that,” Litterst said.

Crews also gave attention to part of the memorial most people don’t even notice. It’s a relief sculpture above the entrance, depicting the Committee of Five who drafted the Declaration of Independence. An inspection of it uncovered a problem.

“We did find that there was a … hairline fracture in Jefferson’s nose. So he got a little bit of touch-up work,” Litterst said. A polymer substance was injected into the crack, to prevent the situation from worsening. In other words, Jefferson got a nose job.

Although the roof and dome work is done, cleaning will continue at the memorial until late September or early October.

Then, in mid-October, another large project will begin at the memorial.

“That will include a complete redo of all the exhibits downstairs. That was courtesy of a donation from David Rubenstein. We’ll also be enhancing the restrooms — modernizing them, and installing some new ramps and other things that will make the memorial far more accessible for folks that can’t do stairs,” Litterst said.