According to the arrest warrant, Emanuel Jackson was among the violent mob that stormed the Capitol building on Jan. 6.
Listen now to WTOP News WTOP.com | Alexa | Google Home | WTOP App | 103.5 FM

A Maryland man who allegedly hit police officers with a bat during the U.S. Capitol riots said on the day of the assault that he was “not here for Trump,” CBS Baltimore reports. According to the arrest warrant, Emanuel Jackson was among the violent mob that stormed the Capitol building on January 6.

At around 2 p.m., rioters climbed the steps of the Capitol building near the Senate wing and began to strike windows and doors. Several police officers tried to restrain the crowd, but were eventually overwhelmed. 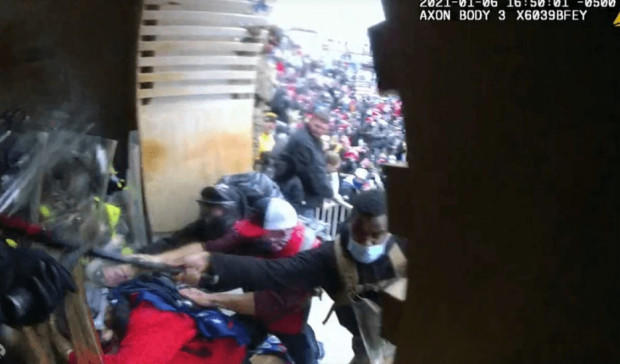 Emanuel Jackson was seen on video surveillance footage at the riots at the U.S. Capitol on January 6, 2021.

Jackson, 20, turned himself into authorities on Monday and had his initial court appearance on Tuesday.

Jackson was interviewed the day of the riot and the video was posted to Twitter.

“I had a bat. They were pepper spraying people. Then, they got me in the eye,” he said.

He then said he didn’t vote because “I thought my vote didn’t count, but I learned a lesson, and I will vote next in the midterms and in other elections.”

He was seen wearing a black hooded sweatshirt, a tan military-style backpack and a light blue surgical mask on his face, sometimes sitting below his chin.

Several hours later, Jackson was again spotted among the aggressive crowd assaulting police officers,  CBS Baltimore reported. He was seen striking a group of Metropolitan and U.S. Capitol police officers with a metal baseball bat, according to the warrant.

In days after the riot, police found more surveillance footage showing Jackson with the metal bat, striking other officers.

Jackson admitted to police that he took part in the riot and identified himself in video and photographs shown to him by police.

More than 100 suspects have been hit with federal charges stemming from the riot that left five people dead. The FBI continues to search through social media, tips, and personal videos to find suspects.

Clare Hymes contributed to this report.