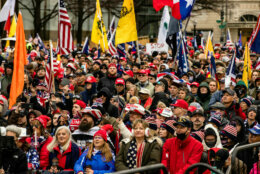 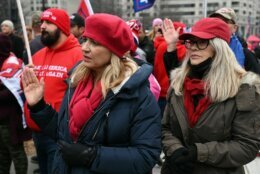 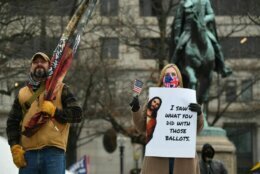 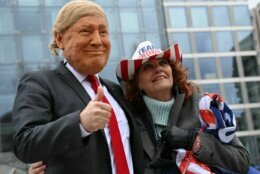 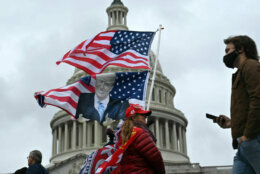 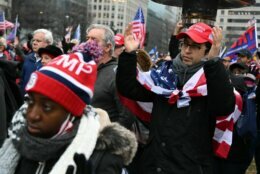 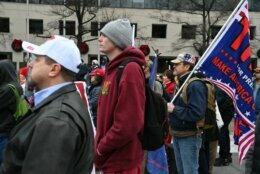 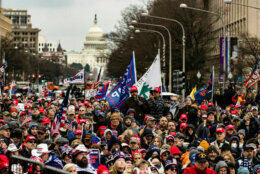 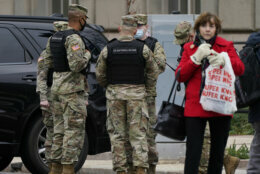 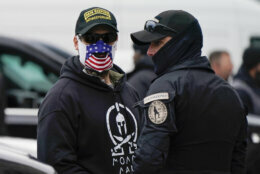 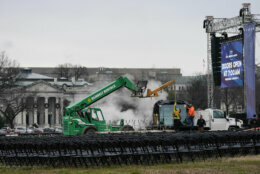 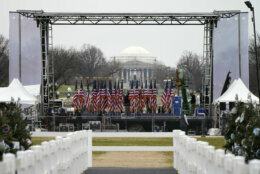 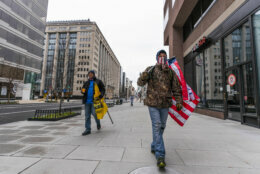 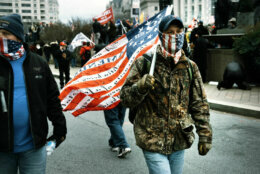 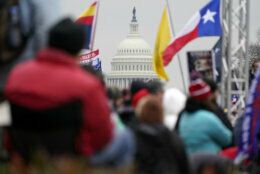 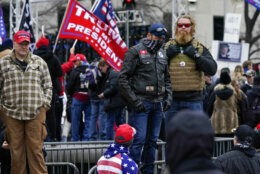 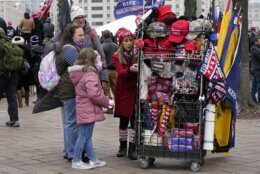 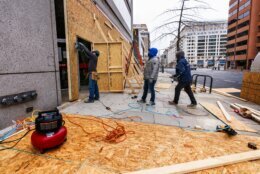 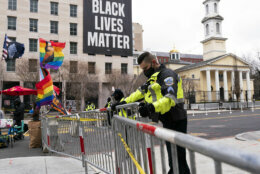 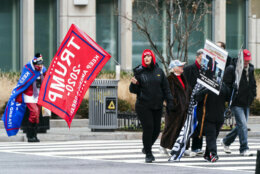 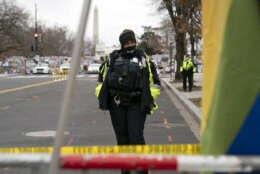 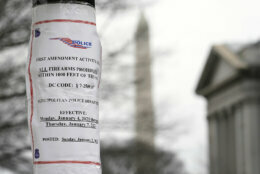 A day before Congress is expected to affirm President-elect Joe Biden’s election victory, supporters of President Donald Trump and his unproven claims of widespread election fraud rallied in downtown D.C. for the first of at least two days of protests this week.

Two people who were arrested are from Asheville, North Carolina, one of whom is facing several weapons charges, including carrying a pistol without a license, a D.C. police spokesperson said.

Some of the arrests were on multiple charges, ranging from carrying a pistol without a license, carrying a rifle without a license, high-capacity feeding device, unregistered ammunition, unregistered firearm, assault on a police officer, simple assault, possession of a prohibited weapon (stun gun), traffic-related offense and possession of illegal fireworks, D.C. police said.

Pro-Trump protesters gathered at Freedom Plaza, where speakers railed against the 2020 election results, echoing the president’s unfounded claims of fraud.

Tuesday’s events included the “Rally to Revival,” headed by the Eighty Percent Coalition, and a smaller “static rally” with “The Silent Majority,” which also has a permit for Wednesday.

Thousands are expected to attend this week, including the far-right extremist Proud Boys, whose leader was arrested Monday shortly after he arrived in D.C. Henry “Enrique” Tarrio is no longer in custody, but a judge on Tuesday ordered him to leave the District and to stay away until his next court appearance. Tarrio is accused of burning a Black Lives Matter banner that was torn down from a historic Black church in downtown D.C. last month.

On Wednesday, President Donald Trump is expected to address an all-day rally on the Ellipse, headed by the group “Women For America First.” A much larger crowd is likely, and other planned speakers include Roger Stone and Rudy Giuliani.

‘We don’t want a repeat’

Though Black Lives Matter DC core organizer Anthony Lorenzo Green did not want to restrict anyone planning on counterprotesting, he did want to advise others on being aware, remaining vigilant and staying safe.

“We don’t want a repeat of what we saw on our streets,” Green told WTOP’s Ken Duffy, referring to the violence that erupted last month and in November.

Green said he’d like to see a stronger response from D.C. officials: “We want, across the board, a denunciation of white supremacists who plan to come to D.C., have come to D.C., in this mission to overturn a legitimate election.”

He also would like to see D.C.’s business community refuse to do business with “hate groups” intent on coming to the District to incite violence.

Green added that he did not want to see any more Black Lives Matter banners being ripped from historic Black churches and being burned with impunity.

“We definitely want to see an effort from our city and our community to really uplift the sacred Black spaces in our city and the history that comes with it, and stand in solidarity with our faith leaders who have been very forthright in calling out how so much has been allowed to go on in our city without any accountability,” Green said.

The D.C. native also took aim at pro-Trump supporters for what he saw as flouting COVID-19 pandemic protocols, such as not wearing face masks and not social distancing.

“Coronavirus has been so devastating for so many in our city, especially Black and brown communities. The last thing we need is people who are flying into our city with no mask on, with no care for the health and safety for our city, to be allowed to basically go wherever they please and basically be in everyone’s face as they were last time,” Green said.

Signs about D.C.’s gun laws have been posted throughout the downtown area.

“Anyone in violation of the posted signs, anyone in violation of District of Columbia law, will be arrested,” Contee said Monday. “So, I want to be very clear about that because we have received some information that there are individuals intent on bringing firearms into our city and that just will not be tolerated.”

He said that he wants anyone who sees someone at the rallies carrying a gun or trying to conceal a gun to call police.

D.C. Attorney General Karl Racine said in a statement that many of the people involved “have stated that they are coming to the District to provoke residents and wreak havoc.”

“The Office of the Attorney General, in coordination with the Metropolitan Police Department, the Council, and the Mayor will closely monitor their activities and do everything in our power to hold them accountable should they break District laws,” Racine said. “That includes illegally carrying firearms within 1,000 feet of these demonstrations, which will not be tolerated under any circumstances.

“We will also act to ensure that those who operate businesses or live downtown — particularly our residents experiencing homelessness — do not suffer harm.”

The National Guard started assisting D.C. police starting Tuesday and “throughout the life cycle of this event,” Contee said Monday. 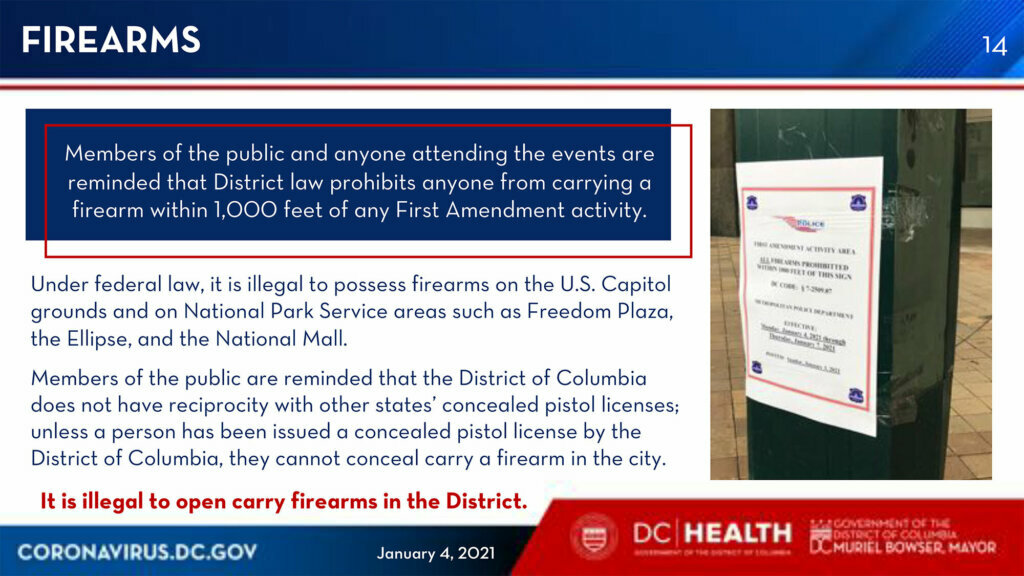 Reactions across the DC area

After Trump claimed on Twitter that the “Vice President has the power to reject fraudulently chosen electors” as protests got underway, Sen. Mark Warner, D-Va., was quick to respond:

Never has and never will. https://t.co/ryYLEb4z1s

Hawley, who wasn’t home, called them “Antifa scumbags” who “threatened my wife and newborn daughter, who can’t travel. They screamed threats, vandalized, and tried to pound open our door. Let me be clear: My family & I will not be intimidated by left-wing violence.”

Shutdown DC tweeted that they “visited Senator Hawley’s house for around 30 minutes. We sang songs, chanted and shared our stories. A small group of people delivered a copy of the Constitution to his door (with Article II, Section 1 of the Constitution dog eared for easy reference).”

We’ve gotten some media inquiries about Senator Josh Hawley’s tweets about us …
1. We are absolutely and unapologetically anti-fascists. We are perplexed that someone would use that in the pejorative and we certainly would hope that Senator Hawley also opposes fascism. https://t.co/qtCvM05sdx

Police backed up the protesters’ claims that they were peaceful. The protesters left when it was explained they were violating local picketing laws, police said Tuesday.

“There were no issues, no arrests,” Master Police Officer Juan Vazquez, a spokesman for the Town of Vienna Police Department, told The Associated Press. “We didn’t think it was that big of a deal.”

“The right to protest is a fundamental right of every American. I have personally exercised this right for decades. But this week I am joining Mayor Bowser and other regional leaders in urging our residents to avoid demonstrations by protesters supporting President Trump’s erroneous claims that the election was fraudulent. These are not ordinary times, and these will not be ordinary protests,” Elrich said in a statement.

He added, “Protest organizers and the groups they represent have shown an alarming affinity for violence. Sadly, they have not been shy about suggesting the need for violence.”

Elrich said that if pro-Trump supporters move to disrupt the tallying of votes to confirm Biden’s win over Trump, it’s a matter for police to handle.

“So, I am asking that residents not go to counterprotests and potentially put themselves in harm’s way. It’s not necessary to do that in order to protect the election’s outcome despite the president’s worst efforts to subvert the Constitution. Let Congress do its job, let the police protect Congress against whatever threats may evolve, and let’s do our part to make sure that the task confronting the police is as simple as possible. And let us hope that peace and human decency prevail at the end of the day. Please stay away, and please stay safe.”

The view in D.C.’s Freedom Plaza where Trump supporters are gathering for the March to Save America which is one of a few early bird rallies ahead of their main event(s) tomorrow. They were chanting “do not certify” when I walked through. pic.twitter.com/sML96tVr77

The National City Christian Church said that it will keep the church building in Thomas Circle closed, but there will be large Black Lives Matter banners that will hang from the columns on Wednesday.

“Our staff and local officials are working hard to keep our building and grounds safe. In our streets we will hear messages of hatred and exclusion, but we will reject them in the name of the Prince of Peace,” Interim Senior Minister Pastor Amy and Congregational Moderator Alan Williams said in a statement.

Police closed a multitude of streets this week for the rallies.

The restrictions are concentrated around the White House and parts of the National Mall on Tuesday and Wednesday.

WTOP’s Fonda Mwangi, Jack Moore and Teta Alim, and The Associated Press, contributed to this report.