Story of DC’s hawk family is now a book 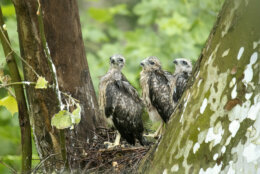 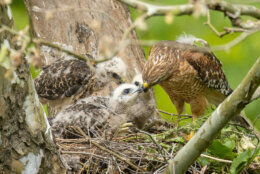 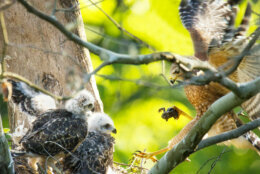 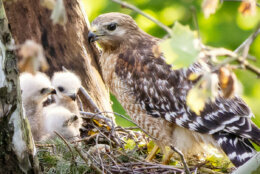 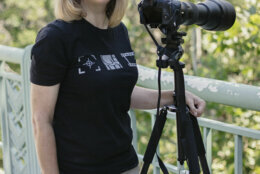 For a few months in 2020, as COVID-19 spread across the country, D.C. residents were delighted by a family of hawks that built a nest in a tree alongside a Connecticut Avenue bridge that spans the Klingle Valley Trail below.

The opportunity to see raptors so close and at eye level was unusual, as were the circumstances surrounding the phenomenon that brought people together at a time they were keeping their distance from each other due to the coronavirus pandemic.

So Jennifer Packard, a D.C. photographer who documented the lives of the raptors, from the construction of the nest to the first flights of the young hawks, wrote a book about it.

The result is “Enraptured by Raptors,” a photo story of the hawks that brought people together to observe and enjoy urban wildlife and also allowed city dwellers to engage in the kind of casual interactions that can make urban life so enriching.

Packard said producing the book and seeing it in several locally-owned bookstores is a dream come true. It’s also available on Amazon.

Packard said she first spotted the nest “under construction” in March. She then watched to see if it was occupied. It was, by a pair of red-shouldered hawks.

From the first day she spotted the hawk couple, which she named Walt and Libby, she said, “I would stop by with my camera and just take a look and see what I could see.”

Packard said because of the nest’s location, passersby could actually see right into it. That’s typically not a view most people get, because hawks like to nest high up in trees.

In this case, because the foot of the tree was along the Klingle Valley Trail below, the treetops very nearly brushed the handrail along the bridge.

Packard, who recalls how her father would feed birds through the winters in the upstate New York home where she grew up, was thrilled when, “One day, I saw two little nestlings peering out over the nest’s edge.”

Overjoyed and eager to share her love of nature, she said, “My first inclination was to just tell everybody who was crossing the bridge.” And that generated a lot of interest.

News of the hatchlings spread across community listservs, and by May, the hawk family sparked newspaper, TV and radio coverage, with reporters joining the small, mostly socially- distanced crowds that would gather each day to check on the hawk family.

Packard said she didn’t worry about the crowds disturbing the raptors.

“These are urban raptors, and they’re used to living in a city,” she said. “They were oblivious to us the entire time.”

At first, there were just two hatchlings. But then Packard, and passersby, some of whom became regulars in the viewing parties that would pop up on the sidewalk, found a third hatchling in the nest.

By this time, Packard had named the hawks. Walt was named after Packard’s father and Libby after a friend’s mother. The first two hatchlings were called Cleveland, for Cleveland Park, and Covid, for obvious reasons.

The third hatchling came along later. She was discovered on a day when her small head popped out from under her mother’s wing, and Packard said a woman walking by asked what everyone was looking at. Packard explained, and asked the woman, “What’s your name?” The woman replied, “Dorothy,” and that’s how the youngest and smallest hawk was named.

Packard said Dorothy was a favorite of Walt’s.

“She and her dad had a very close relationship. It was very sweet and obvious because he would touch his beak to hers. And I have photos of that.”

The book is designed to share the story of the hawks, but Packard said it’s also a way to help a nonprofit that saved Walt’s life.

Packard explained that at one point, observers were horrified to find Walt helplessly suspended from a tree branch. He had gotten tangled in fishing line.

Suzanne Shoemaker, a licensed wildlife rehabilitator, operates the center and has helped birds of prey of all sizes that have been hit by cars, suffered from collisions with windows or, like Walt, trapped in fishing line left behind by anglers.

An arborist from Bartlett Tree Experts actually plucked Walt from the branch some 40 to 50 feet up in the air, and he was taken to the raptor center for rest and rehabilitation before heading back to the nest.

Then, Walt returned to Libby’s side, both of them delivering a constant flow of fresh food to their hawklets. Chipmunks and frogs were frequently on the menu.

Referring to the rescuers, Packard said, “Had they not been able to do that, the family would not have had a high survival rate.”

Finally, the day came when all three would leave the nest.

“When they fledged, they did return to the nest at mealtimes until they were able to hunt on their own,” Packard said.

It’s not unusual for raptors to have a 50-50 chance of survival, but Packard said that as far as she has been able to document, this was one hawk family success story.

“This was a family unit that really took care of each other, and everyone found that quite beautiful.”