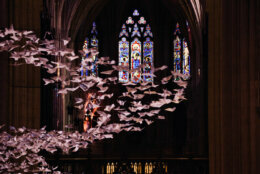 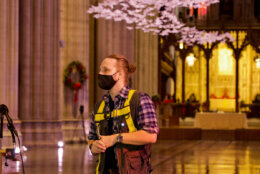 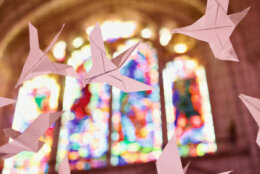 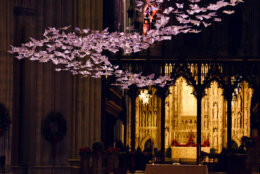 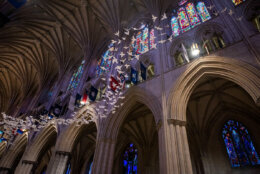 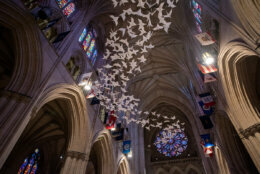 The Washington National Cathedral remains closed to visitors due to the COVID-19 pandemic, but a new piece of art is being installed with the hope that, before too long, people can enjoy it.

The piece, called “Les Colombes,” consists of as many as 1,500 origami doves, each suspended from a nearly invisible filament. They float over the nave of the cathedral, and in the late afternoon, they’re dappled with the multicolored light streaming in through the stained-glass windows.

The Very Rev. Randolph Hollerith, dean of the Washington National Cathedral, said the dove has a special meaning.

“They mean hope; they mean peace. They are often symbols of the Spirit,” Hollerith said. “And hope and peace, and having God’s spirit with us, is something that we very much wish and want for the year to come.”

The work, by artist Michael Pendry, has traveled the world, from Europe to Israel and to the U.S. Pendry said that each dove is hung separately, and the shape of the piece varies depending on the space where it’s being installed.

Pendry said his “flock” grows as it travels because, until pandemic restrictions hit, the public would be invited to sit at tables placed wherever the piece was installed. They were given a chance to learn how to fold their own doves, and in many cases, they’d write messages on the doves.

Pendry said he was often moved by the messages, some of which he described as heartbreaking. He said there were common themes: freedom, peace and love.

“These are the things that people are really worried about and want to have in their lives — more than having a new car or a bigger house,” he said.

The installation isn’t static; at night, Pendry said, there are sound and video components that are part of the exhibit.

Both Pendry and Hollerith are hopeful that the Washington National Cathedral, which remains closed for now, can reopen so that visitors can enjoy the work.

For now, there’s a link at the cathedral’s website where people can register and find out when they could come to see the work in person.