Toast of the town: DC Champagne sales flowed during celebrations for Biden

There were plenty of memorable images from Saturday’s spontaneous celebrations of Joe Biden’s projected presidential victory, and one of them was of Champagne corks popping across the city.
Listen now to WTOP News WTOP.com | Alexa | Google Home | WTOP App | 103.5 FM

There were plenty of memorable images from Saturday’s spontaneous celebrations of Joe Biden’s projected presidential victory, and one of them was of Champagne corks popping across D.C.

Twitter was filled with videos and photos of Champagne spraying throngs of Biden supporters at Black Lives Matter Plaza by the White House, and several D.C. liquor stores reported higher sales over the weekend, especially of Champagne.

Nolan Rodman, co-owner of Rodmans Discount Gourmet and general manager of the company’s D.C. location on Wisconsin Avenue, worked over the weekend and said he saw a clear spike in Champagne sales.

“A lot of people were celebrating and happy, and buying all of the Champagne, and wanted to remember and celebrate the outcome of the election,” he told WTOP, describing the mood as jubilant.

“What I saw was just a pouring in of sales from noon until close of business, and I have to believe that is in response to the election results,” Siegel told WTOP. “I think Washington is really happy and wanted to celebrate and is relieved — and the sales definitely reflected that.”

As for the beverage of choice among revelers, Siegel said that though everyone imbibes in their own way, “Champagne has long been the customary product that people drink during a celebration, so yes, Champagne sales definitely stood out.” 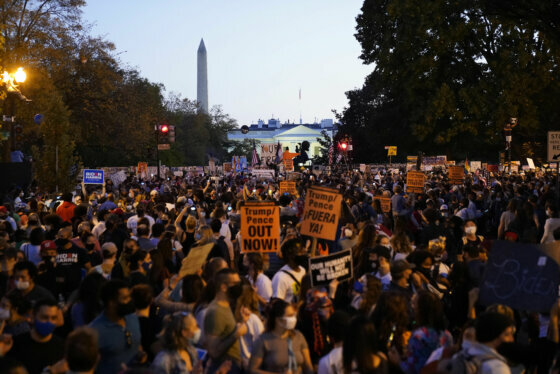 As night fell on D.C., thousands of people continued celebrating the news that former Vice President Joe Biden had become…

Siegel added that while he wasn’t at Black Lives Matter Plaza, where much of the celebrations took place, he was in Georgetown on Saturday and the mood “was pretty special, pretty awesome … just the general feeling in the air was really good.”

Party near the White House, hour four and the Champagne keeps flowing. Crowd goes wild when a man with a Biden-Harris flag climbs a traffic light. Ran into a group sipping beer while talking about flipping Georgia.

D.C. police told WTOP that, overall, events from the weekend were peaceful.

Jared Powell, spokesman for the D.C. Alcoholic Beverage Regulation Administration, said ABRA does not track liquor sales on particular days. But he reminded all venues in D.C. that sell liquor to be mindful of the city’s Phase Two guidelines, and the activities and hours that are allowed during the COVID-19 pandemic.