Protesters gather at Trump Hotel for ‘Save the Post Office Saturday’

More than one hundred people gathered outside of Trump International Hotel in Northwest, the site of the old post office downtown, as part of a nationwide effort to demand action to keep mail in voting safe.
Listen now to WTOP News WTOP.com | Alexa | Google Home | WTOP App | 103.5 FM
(1/4) 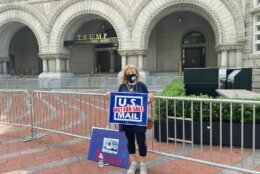 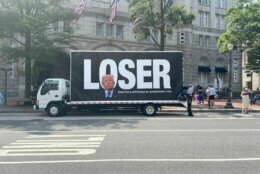 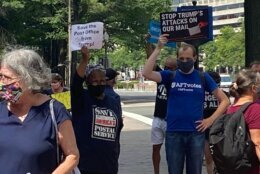 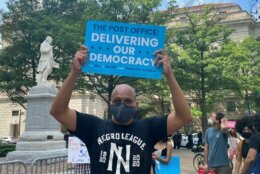 More than 100 people gathered outside of Trump International Hotel in Northwest, the site of The Old Post Office downtown, as part of a nationwide effort to demand action to keep mail-in voting safe.

The protest, organized by MoveOn.org was part of a larger effort nationwide as people gathered across the country for “Save the Post Office Saturday.”

The group is demanding that Postmaster General Louis DeJoy resign from his position. He was appointed by the USPS Board of Governors, all of whom were selected by President Donald Trump and approved by Senate, on May 6.

Earlier this month, DeJoy announced a series of organizational changes, which resulted in a reduction in employee overtime hours and the elimination of postal-sorting machines.

Critics say the changes would delay mail delivery right at the time millions of Americans are expected to vote by mail. Deborah Szeredy, executive vice president of the American Postal Workers Union, said the union was blindsided by the recent changes.

“He was supposed to go through procedures before he made those changes, and he didn’t even notify the union until later, so we have a big problem with that because they’re required to,” Szeredy said.

She says vote-by-mail is safe and the union is prepared to for the onslaught of mail-in ballots this election season.

“People have been voting by mail for a long time. So it’s nothing new; we’ve been handling it all along and yes there’s going to be more, but it’s not something we can’t handle,” Szeredy said.

In a rare Saturday session, the House of Representatives passed legislation that would reverse recent changes made by DeJoy and send $25 billion help the agency ahead of the November election.

Meanwhile, the U.S. Postal Service launched a new election mail website to help voters find information about requesting mail-in ballots as well as the deadlines for each state.