Why did DC police intervene at one federal statue’s destruction but not another?

Over the weekend and into Monday night, protesters in D.C. have targeted statues depicting historical American figures with ties to the Confederacy, slavery and violence against Native Americans. But in only one instance did D.C. police intervene, and the police chief explains why.

Last Friday night, a group of protesters pulled down the statue of Albert Pike in Judiciary Square. Pike was a Confederate brigadier general, but his statue, dedicated by the Freemasons in 1901, intentionally portrayed him as a civilian and not in military uniform. Despite that distinction, calls to take down the Pike statue have sounded years before it was toppled.

Videos of the group pulling down the statue shared on social media showed police officers nearby, appearing to watch as the destruction continued.

Speaking exclusively to WTOP, Chief Peter Newsham said the statue sat on federal property, which is U.S. Park Police jurisdiction. Beyond that, D.C. officers made the call not to intervene.

“A tactical decision was made that the crowd had become so aggressive that it would have been dangerous to send police officers into the crowd. Unfortunately, those people were bent on destroying property in our city,” said Newsham, who called the behavior “disturbing.”

President Donald Trump tweeted after seeing videos of the incident. Newsham did not offer comment on the tweet.

The D.C. Police are not doing their job as they watch a statue be ripped down & burn. These people should be immediately arrested. A disgrace to our Country! @MayorBowser

Then, on Monday night, U.S. Park Police requested D.C. police assistance in Lafayette Square, where a group of protesters was attempting to pull down a statue of President Andrew Jackson. Jackson was a slaveholder and oversaw the forcible removal of Native Americans from the South.

Newsham indicated that Monday night’s scene was much less chaotic and easier for officers to control than the events of last Friday night.

At approximately 8 p.m., a group of approximately 300 protesters started taking down sections of the temporary chain-link fence surrounding the Jackson Statue. They attacked the Andrew Jackson statue in the center of Lafayette Park with hammers, chisels, and muriatic acid while putting chains and ropes around it in an attempt to bring it down.

The statement goes on to say that two U.S. Park Police officers were hurt after protesters “attacked the USPP with projectiles and sticks.” Two protesters were arrested.

Tensions between protesters and law enforcement flared as dozens of police showed up to Black Lives Matter Plaza to clear camps that had been set up during ongoing demonstrations. D.C. police initially could not confirm officers used pepper spray on the crowd, but Newsham later said that pepper spray was used.

“Pepper spray was deployed to disperse criminal suspects who were either attempting to destroy property or assault police officers. All deployments will be investigated,” Newsham said. Four D.C. police officers were also hurt in the skirmish.

Along with the vandalism of the Jackson statue, four historic cannons were “heavily damaged,” according to U.S. Park Police.

There has been renewed scrutiny over what is memorialized in the U.S., particularly over monuments honoring Confederate figures, following the May 25 death of George Floyd in Minneapolis police custody.

It’s unclear if other statues around D.C. will be targeted as Jackson’s and Pike’s were, but Newsham said police are prepared to assist federal partners in their response.

“I agree with those who say that we can disagree with what a statue or a piece of property represents, but we have to take lawful measures to have those removed. It’s never appropriate to take the law into your own hands and to break the law that those folks did on that night,” he said.

WTOP’s Abigail Constantino and Jack Pointer contributed to this report. 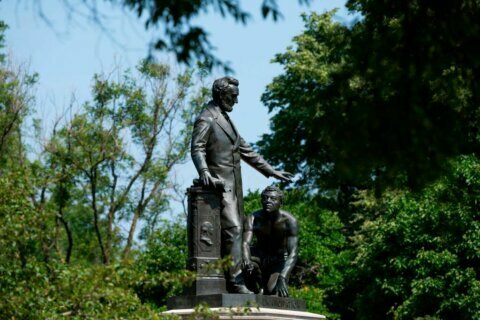 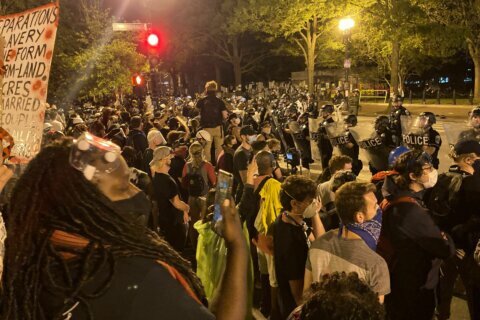 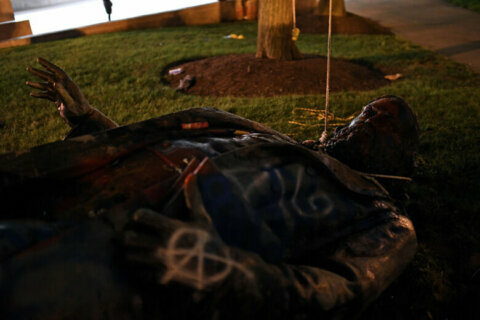