The Giant National Capital Barbecue Battle normally sets up on Pennsylvania Avenue for one weekend in June. This year participants hope to keep the spirit of the event alive via an online event.
Listen now to WTOP News WTOP.com | Alexa | Google Home | WTOP App | 103.5 FM

Before the coronavirus pandemic, late June in D.C. meant only one thing for smoked meat fans: the Giant National Capital Barbecue Battle.

Not only was the two-day event on Pennsylvania Avenue a chance for backyard pitmasters to mingle with the experts; it was also a chance for the experts to compete for an automatic berth at the Jack Daniel’s World Championship Invitational in Lynchburg, Tennessee, in October.

Sadly, like many other annual events in D.C., the in-person event has been canceled due to the virus. It would have taken over a few blocks of Pennsylvania Avenue around 6th Street Northwest during the weekend of June 27 and 28. This year, though, it’s a virtual event that lasts all month.

While barbecue fans won’t be able to get a whiff of glazed ribs, smoked chicken or savory burnt ends, they will still be able to put their own creations up in a virtual competition judged by Myron Mixon, Tuffy Stone and Moe Cason, three champion pitmasters known for their cookbooks, restaurants and TV appearances.

Stone, who lives in Richmond, Virginia, where he runs a catering company, heads the Cool Smoke competition barbecue team that has won six major championships (including “The Jack”) and owns The Westover restaurant, laments the loss of one of his favorite events.

“D.C. is so energetic anyways, but when you fill that avenue with the smells and the smoke coming from that barbecue … it’s such a cool event,” Stone said. “It’s one of my favorite events of all, so to not be there this year, it seems really strange. I think we can all agree there’s a lot of strange things going on.”

Giant has compiled various videos of Stone and his friends/competitors Cason and Mixon with tips on key topics such as ribs and burnt ends.

The trio will also be judging a virtual competition where home cooks can present their own barbecue recipes for chicken, beef, turkey and pork ribs. Contestants need to write out their step-by-step recipe and submit photos and videos of the finished product. The first round ends June 21.

After that, the finalists will advance to judging from the celebrity panel. Winners can earn Giant shopping sprees up to $1,000.

Anyone who has attended the event in person knows that the event is more than just barbecue. It includes wellness screenings and live music, and last year, the Iowa Pork Producers brought in the Pork Queen of Iowa, who gave away coupons and items such as digital meat thermometers.

While there won’t be body mass evaluations or blood pressure screenings this year, the event website has some health and nutrition tips, as well as links to vote on a “battle of the bands” and two livestream events.

Elle King, a country and blues singer perhaps best known for her single “Ex’s & Oh’s,” will be on stage June 19. Her set begins at 7 p.m. 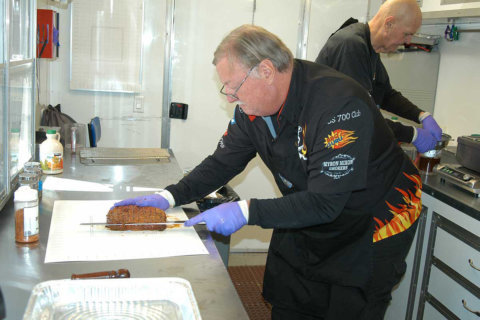