The National Capital Barbecue Battle on Pennsylvania Avenue is one of the most important events for pitmasters in the U.S., with a trip to Jack Daniel's world championship event in Tennessee on the line.
(1/5) 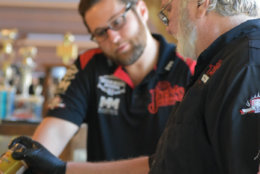 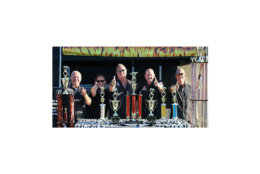 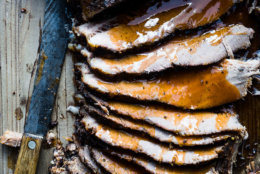 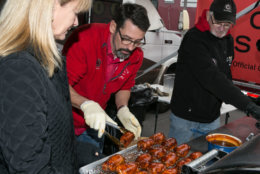 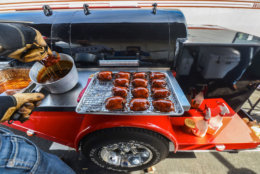 WASHINGTON — The National Capital Barbecue Battle takes over Pennsylvania Avenue between 7th and 3rd Street Northwest, just off the National Mall on June 23 and 24.

The celebration of all things meat and heat is packed with activities including eating competitions, cooking demos, live music, beer and wine tastings, and the namesake battle itself — which brings out some of the best-known pitmasters.

Winners in the Kansas City Barbecue Society-sanctioned event can take home a share of a $20,000 prize pool, bragging rights and most importantly, an invite to the Jack Daniel’s World Championship Invitational this October in Tennessee.

Competitors are judged on their meats (chicken, brisket, pork shoulder and ribs) and sauces. Individual category winners and an overall winner are named.

Tuffy Stone of Richmond, Virginia, is a cookbook author who has won the world champion multiple times. He is known for his appearances on reality television barbecue shows.

He said since the D.C. event’s winner becomes an automatic qualifier for “The Jack” Championship, it brings out some of the toughest competitors.

“Cooking in the nation’s capital is so exciting to me,” Stone said. “Because of the event’s automatic status, we’ll see great pitmasters from all over the country descending upon D.C. to see if they can win that event and go to The Jack.”

Stone, who won The Jack for the third straight year in 2016, will be competing against local challengers, along with fellow nationally-known pitmasters like Moe Cason, who is coming in from Des Moines, Iowa, as both a presenter and competitor.

One of the locals is Michael Fay of Springfield, Virginia, who runs a standout competition barbecue team called Aporkalypse Now. In 2017, his team won the overall title thanks to first-place finishes in both pork and brisket.

He said his team prepares all week for the can’t-miss event.

“It’s 100,000 of your closest friends eating and drinking and having a good time. It’s a celebration of life. There’s food, there’s festivities. It’s just a big party,” he said.

Myron Mixon is another pitmaster who made his name based on his performance at the big event on Pennsylvania Avenue. While he is from a small town in Georgia called Unadilla, where he is also mayor, Mixon has business interests in Northern Virginia.

His restaurant, Myron Mixon’s Pitmaster Barbecue, opened in Old Town Alexandria in 2017. He will be in the area for a full week, checking up on his restaurant and preparing for his Saturday afternoon appearance at 2 p.m.

For barbecue chefs and pitmasters who aspire to greatness, the D.C. event is an important place where pitmasters can prove themselves.

Unlike other events that are held at huge fairgrounds, the barbecue battle takes place on a finite stretch of Pennsylvania Avenue, which means not everybody who wants to compete can get a spot.

“You want the ‘attaboy’s and everybody to pat you on the back, but when you get that trophy from beating your competitors, it means a lot,” Mixon said. “That’s what got my career started back in 1996. It led to a lot of things: TV, cookbooks, cooking classes and right on up to having a restaurant in Alexandria. Winning that contest is a big deal.”

For Heath Hall of Pork Barrel Barbecue in the Del Ray neighborhood of Alexandria, the event gives D.C. residents an idea of what great barbecue can be. He and his team won the award for best sauce in 2017.

Hall grew up in Missouri, where he said he could find a great barbecue place on every corner.

In D.C., it’s not quite the same; he noted that the barbecue culture in the District, Maryland and Virginia is probably stronger than it’s ever been.

“There’s definitely an energy in this area for barbecue,” Hall said. “If you’re a fan of low and slow smoked meat, we’ve still got a ways to go, but there is a real renaissance here in the area.”

Hall said he is glad to see a wide range of barbecue choices here, including Mixon’s restaurant, D.C.’s Hill Country near Gallery Place, Mission BBQ in the Maryland and Virginia suburbs and even Jose Andres’ addition of barbecue to the menu at the recently opened America Eats Tavern in Georgetown.

Hall will be giving a demo of how to make tacos al pastor during his turn on stage at 1:20 p.m. on Saturday.

Doug Halo, the contest coordinator, said the meat is judged on appearance, taste and tenderness.

Stone said he will have plenty of copies of his new book, “Cool Smoke: The Art of Great Barbecue,” and will be interacting and talking with fans throughout the event, which of course, he is trying to win.

He’ll also be presenting on the Giant Fresh Ideas Stage on Sunday at 3:20 p.m.

“I answer lots of questions for beginning cooks and experienced cooks. It’s just a lot of enthusiasm for outdoor grilling and cooking up there,” Stone said.