A second night of protests continued in D.C. as residents marched to show their anger over the death of Minnesota man George Floyd earlier in the week.
Listen now to WTOP News WTOP.com | Alexa | Google Home | WTOP App | 103.5 FM
(1/14) 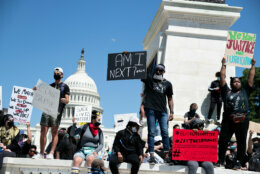 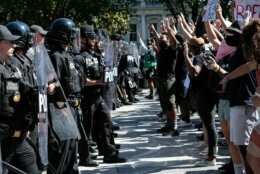 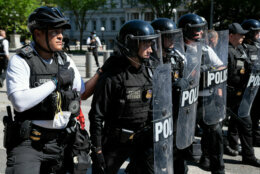 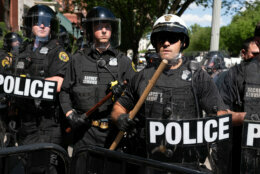 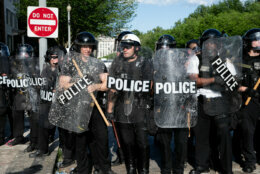 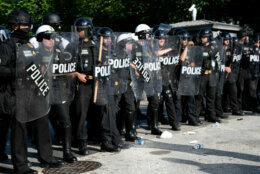 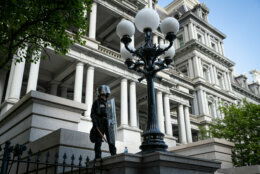 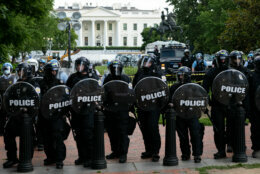 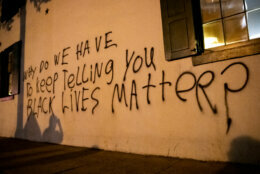 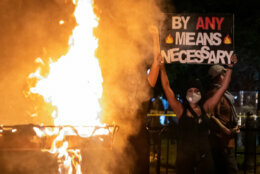 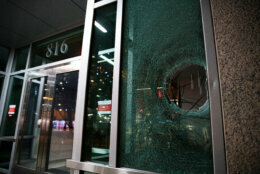 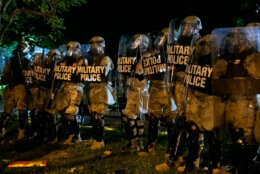 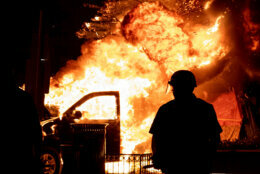 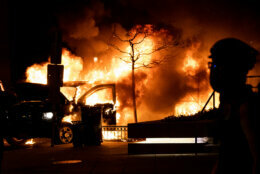 A third straight night of protests in D.C. is expected Sunday evening.

“We know of some planned demonstrations. Our expectations are that people will peacefully assemble here in the city as they do 99% of the time, and we won’t have a repeat of the events of last night.” D.C. Police Chief Peter Newsham said in a news conference, held by D.C. Mayor Muriel Bowser Sunday afternoon.

“We certainly recognize and empathize with the outrage that people feel” over the death of 46-year-old Minneapolis man George Floyd on May 25, said Bowser.

“We are proud of our city. We do not want our city to be destroyed.” Bowser said.

Asked about imposing any citywide curfew following Saturday night’s violence in D.C., Bowser said “we know that the people who were disruptive last night are not likely curfew followers.”

D.C. police have made 17 arrests from Saturday night, with Newsham expecting more:

Newsham said 14 were charged with rioting, two with burglary and one with simple assault.

Eleven D.C. police officers sustained non life-threatening injuries, with one officer scheduled for surgery Sunday for a leg fracture after being hit by a brick north of Lafayette Square park, according to Newsham.

Newsham said besides bricks, officers also had “incendiary devices” thrown at them.

“The behavior of our police was credibly responsible, heroic in many instances, and I think that I couldn’t have been more proud of the folks that were out there,” Newsham said.

“We have to be out there, we will be out there as long as we need to be to ensure that the city is safe.” Newsham said.

“We are hoping and urging participants to be peaceful and we are hoping that cooler heads will prevail in the event that we have agitators who return to our city, MPD will be prepared.” Newsham said.

On Saturday, a day of protests in the District prompted by the death of Floyd continued into the night.

Floyd died on May 25 after police officer Derek Chauvin pinned him to the ground with his knee on his neck for several minutes.

Floyd was unarmed. Chauvin has been charged with third-degree murder and manslaughter.

The activity began Saturday afternoon outside of the Capitol as protesters gathered before heading west on Pennsylvania Avenue toward the White House.

WTOP reporters Alejandro Alvarez, Dick Uliano and Ken Duffy provided updates from various locations throughout the District. Duffy provided the video above from 21st Street and Constitution Ave. NW after protesters had walked north from the Lincoln Memorial later on Saturday evening.

The day began with D.C. Mayor Muriel Bowser pushing back against incendiary comments made by President Donald Trump about protests near the White House on Friday night.

In the District, late Saturday afternoon, protesters gathered on the west side of the White House and after what seemed like, according to WTOP’s Alvarez, a sustained period of calm and separation, skirmishes started with Secret Service officers on the edge of Lafayette Square near the Eisenhower Executive Office Building.

The Secret Service didn’t push into 17th. There was a second standoff here until they shouted something unintelligible which freaked the hell out of everyone and caused a stampede.

Most people took that as a sign to start moving. They’re heading to join another group. pic.twitter.com/RzIJiM80we

WTOP’s Ken Duffy walked with another group of protesters from D.C.’s Shaw neighborhood down to the north side of Lafayette Square, where they met up with the group that had arrived earlier. That original group dispersed after pepper spray was deployed.

As they walked, they chanted “I can’t breathe.”
WTOP’s Ken Duffy recorded audio from the protest in Lafayette Square. Listen below.

In Northeast D.C., close to the Maryland border, hundreds of cars gathered for a caravan protest whose destination was police headquarters in Judiciary Square.

WTOP’s Dick Uliano was there.

He said one car had a sign reading “no justice, no peace” as drivers gathered for the trip deeper into the District. “In all honesty, all we want is peace. We just want the people that are supposed to protect us, to do that,” one protester told Uliano.

Students, seniors and families all joined the protest.

Jenna Alcorn, of Arlington, was there.

“It makes me extremely frustrated and angry to see innocent black brothers and sisters dying at the hands of the police who are supposed to be protecting us,” she said.

It took at least an hour for the cars gathered in the Northeast parking lot to clear out and head downtown.

Duffy, at Lafayette Square, said the protesters made multiple laps, chanting “no justice, no peace.”

From that point, he walked with the group to the National Mall where they stopped at the Washington Monument. Protesters stopped, sat and knelt, saying “I can’t breathe.”

At one point, the group, which Duffy estimated had swelled to over 1,000, stopped and sat for nine minutes, the length of time Floyd was pinned down by police officer Derek Chauvin.

After leaving the Lincoln Memorial with the crowd, Duffy observed a melee break out between U.S. Park Police and protesters when police tried to arrest someone near the intersection of 21st Street and Constitution Avenue.

Demonstrators began whaling on the officers in what seemed like an attempt to prevent the arrest, causing police to eventually pepper spray the crowd and push it back into the park.

Protesters followed the police to their motorcycles, which were also in the park, and again chanted “no justice, no peace” and “hands up, don’t shoot.”

WTOP traffic reporter Steve Dresner said eastbound traffic was stopped by protesters on I-695 from Southwest to Southeast D.C. close to the South Capitol Street exits. Traffic was getting by slowly the other direction at about 7 p.m.

The lanes on the eastbound side of the Interstate were reopened shortly before 7:30 p.m.

UPDATE: I-395 & I-695 both ways between 14th St and 11th St Bridges, various lanes are blocked at the reported demonstration. Alternates encouraged. Listen live to WTOP’s latest traffic reports every 10 minutes on the 8s. https://t.co/aESgy6FEFU #DCTraffic #VATraffic #MDTraffic

Tensions had gotten so high in the District that its National Guard unit had been deployed.

A statement from D.C National Guard’s Commanding General shortly after 9 p.m. said that the unit had “been activated at the direction of the Secretary of the Army in response to a request for assistance from the U.S. Park Police to help maintain order during protests in the vicinity of the White House.”

WTOP’s Zeke Hartner reported that a half dozen troop carriers were driving past the intersection of 15th Street and Constitution Ave. near the White House, carrying about 10-15 troops in each. Some of the troops had face guards attached as well.

Pepper spray permeated throughout the crowd at Lafayette Square, causing protesters to dissipate, according to Hartner.

Hartner also witnessed someone smash in the windows of a nearby T-Mobile store.

Other protesters seemed upset about the property damage and wondered why they couldn’t protest peacefully, per Hartner.

Hartner said that those who were responsible for smashing the store’s windows did not enter the building and immediately left the area.

An SUV has been set alight at the intersection of Connecticut Ave. and I Street, a block over from Lafayette Park. Police flushed everyone out with flashbangs.

Flames spread to a tree and a small structure on the sidewalk. DC Fire has an engine on it. pic.twitter.com/e3HL6SP3cI

Early Sunday morning, D.C. Fire and EMS reported that a multistory scaffolding caught fire in an alley near the Hay Adams hotel located right across from Lafayette Square.

D.C. Fire reported that the fire did not reach the historic hotel.

See the location of Lafayette Square, just north of the White House, via the map below:

A smaller protest in support of Floyd took place in Prince William County, Virginia along Sudley Road throughout the afternoon and into the night, just south of I-66 around the Manassas Mall.

Police declared the protest an unlawful assembly around 9:30 p.m. and advised those who live in the area to shelter in place.

As of 10:30 p.m., police formed a line across Sudley Road near its intersection with Sudley Manor Road. All traffic has been stopped from that point up until I-66 north of it.

Virginia State Police said that the protesters turned violent within a short period time after its officers arrived to assist Prince William police.

Demonstrators threw bricks, rocks and bottles at passing vehicles and then at police officers, according to state police.

After being repeatedly told to leave the area, per state police, authorities used pepper spray to break up the crowd.

Scenes in D.C. were no different than they were in major cities around the U.S., where citizens upset with the way Floyd was pinned down by police officers investigating an alleged forgery incident at a small grocery store in Minneapolis.

On Friday night, a federal officer outside of the U.S. courthouse in Oakland, California was shot and killed. California Gov. Gov. Gavin Newsom called for patience and perspective as the federal investigation plays out.

“No one should rush to conflate this heinous act with the protests last night,” he said in a statement.

In New York, the epicenter of the coronavirus pandemic in the U.S., protesters came out for a third day. Mayor Bill de Blasio asked residents to stay calm Saturday after demonstrations Friday left people bloody and cars burned.

In Atlanta, the mayor called for a 9 p.m. curfew in the wake of the protests, and cities such as Austin, Texas; Columbus, Ohio and Los Angeles were also enhancing police activity in an effort to keep protests from getting out of control.