Moki, a crafty pet cockatiel, flew away from his home in D.C. Now, the bird has been reunited with his family, after after several days.
Listen now to WTOP News WTOP.com | Alexa | Google Home | WTOP App | 103.5 FM

A crafty pet cockatiel that flew away in D.C. has been safely reunited with his family after being found several days later, several miles away.

Owners Hong Jiang and Kevin Ercoline live in the Glover Park neighborhood of Northwest D.C., and their bird, Moki, mistakenly got loose Saturday.

When a neighbor came to their door, their dog got loose. Jiang went to grab the dog, forgetting that Moki was sitting on her shoulder.

Jiang said Moki is a year old and a beginner at flying. But he took off and kept flying up, higher and higher.

“It was pretty windy on Saturday, so he got carried away by the wind,” said Jiang.

Crushed, the couple put up “lost bird” posters around the Georgetown and Foxhall areas, posted on the Nextdoor app, bicycled around their neighborhood looking for Moki and even visited local parks and called out his name.

On Monday, Anitra White was walking back to her home in the Eckington area of Northeast after getting some carryout food to eat. 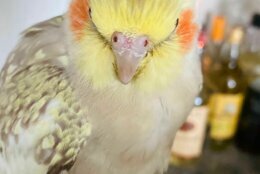 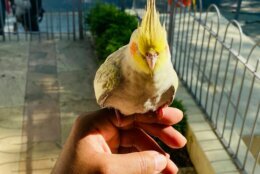 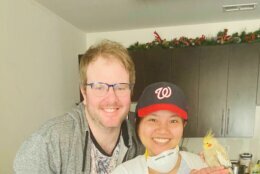 “It scared the mess out of me. You don’t walk in D.C. and birds just land on you,” White said.

The bird also tried to land on the back of one of her relatives, but White quickly concluded that it was a friendly bird.

Eventually, it landed on White’s shoulder and she stood there on the street trying to figure out to  whom it could belong.

“People were stopping and they were (saying) ‘Oh my god, you’re like Dr. Doolittle!’ I was like, no, this is actually not my bird,” White said.

The bird flew away from her a few times, but kept returning, according to White.

White ended up taking the bird home, spreading the word online, and converting her chihuahua Bella’s cage into a place where their feathered visitor could sleep.

Concerned that the bird might have gone a long time without food, White did some research about cockatiels and fed the little bird some pineapple and bread.

Finally, she was notified online that someone in another part of D.C. was looking for a lost bird.

Jiang said when she and White talked on the phone, she could hear the bird chirping in the background and she knew it was her Moki.

She and her husband picked up the bird at White’s apartment on Tuesday.

It turns out, White is an animal lover who once owned a bird that got lost and never came back.

“That was important to me, for him to go back to his owner,” White said.

She is happy that of all people, Moki chose to land on her.

Jiang said she finds it interesting that Moki settled on White, because from a bird’s-eye view the two women have similar hair.

“I guess that’s all he remembers is my long black hair,” Jiang said with a laugh.