Police have identified the suspect and the victim from Thursday night's deadly shooting in downtown D.C. during the evening rush.

A judge ordered Friday that a D.C. man will remain held in connection with Thursday night’s deadly downtown shooting.

Jaykell Mason, 20, of Southeast, faces multiple charges, including first-degree murder while armed and assault on a police officer while armed, D.C. police said.

In a court appearance Friday, Mason’s left arm and hand was in a cast; investigators said he was shot when he and police exchanged gunfire during a pursuit — after a man was found with multiple gunshot wounds in the 700 block of Eighth Street Northwest.

The victim was identified as 29-year-old Terence Dantzler Jr.

Just after 5 p.m. Thursday, near the National Portrait Gallery in the Chinatown area, police said officers responded to a report of a shooting, and found Dantzler unconscious and unresponsive on the scene. He was taken to a hospital, where he was pronounced dead.

“For someone to do that 5 o’clock in the afternoon in this part of town is pretty brazen,” D.C. police Chief Peter Newsham said at a news conference Thursday night.

Mason ran from the scene, police said, and officers chased him to the 700 block of 10th Street Northwest, where they exchanged gunfire. That’s when Mason was hit in his left hand, according to court documents.

Mason was later arrested near 11th and H streets Northwest. A handgun was recovered from the scene, Newsham said.

No officers were hurt.

Initially, investigators believe there was some kind of a dispute between Dantzler and Mason, and that Mason pulled a gun and shot him.

Court documents accessed Friday include a number of witnesses and surveillance video from the area that helped piece together what happened that night.

Dantzler was shot in the head and body, according to court documents, with one gunshot wound right in the center of his chest.

At least two witnesses — one who was on the same block, another who was nearby — told police they saw the suspect standing over Dantzler and shooting him several times while Dantzler was on the ground, according to court documents.

Just before the shooting, surveillance video captured Dantzler walking down the street with the suspect following behind, court documents said. One video captures the two men facing each other in one moment, then appearing to approach each other before the suspect pulls out a handgun and opens fire. The suspect is then seen shooting the victim again while he’s motionless on the ground.

During an investigation of the area, a handgun was found with one round of 9 mm ammunition in the chamber and zero rounds in the magazine, court documents said. The same ammunition was found in the pocket of Mason’s pants.

Mason later told police that although he was at the scene, he denied shooting anyone, court documents said.

In court Friday, Mason’s defense attorney wanted him to be released because she claimed none of the witnesses positively identified him as the shooter in Dantzler’s killing.

The judge said probable cause for the shooting involving the police officers was enough to hold Mason, and she ordered that he remain held.

Police did not name the officers who were involved, but said they have been placed on routine administrative leave. The officers were using body cameras, and police said that footage is under review.

Mason is due back in court March 4. 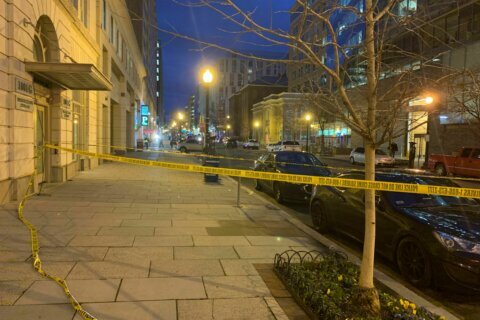