A blocked hydrant delayed firefighters on Saturday as they respond to a blaze at an apartment building in D.C. where people were reported trapped.
Listen now to WTOP News WTOP.com | Alexa | Google Home | WTOP App | 103.5 FM
(1/7) 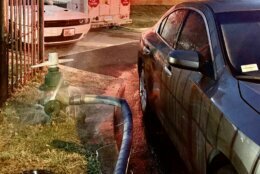 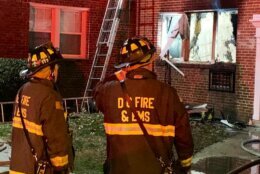 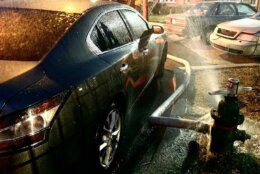 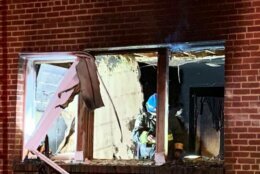 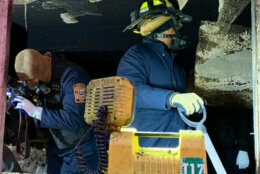 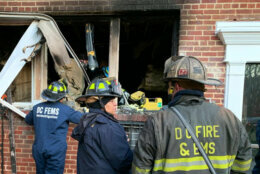 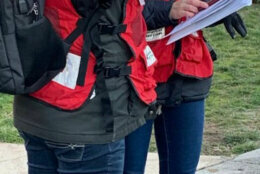 A blocked hydrant delayed firefighters on Saturday as they responded to a blaze at an apartment building in Southeast D.C. where people were reported trapped.

Firefighters were called to the 300 block of 37th Place SE in the Fort Dupont neighborhood around 5:45 a.m. where a fire had broken out on the first floor of a two-story apartment building.

When help arrived, the firefighters spent “critical minutes” getting to the fire due to a car parked directly in front of a hydrant, obstructing their ability to attach a hose and put out the fire quickly, D.C. Fire & EMS spokesman Vito Maggiolo said.

“A key challenge was that there was a blocked fire hydrant at the end of this cul-de-sac. Anytime you block a fire hydrant, you are delaying us in getting water to supply … it could have had serious, or fatal, consequences,” Maggiolo told WTOP’s Melissa Howell.

This is why you CANNOT park next to or block a fire hydrant. Any delay in getting water at a fire can have deadly results. This was on 37th Place SE this morning, at a blaze where people were reported Trapped. pic.twitter.com/2ckA5T2Jqf

Fourteen people were displaced, including nine adults and 12 children, according to a spokesperson. Two children were transported to the hospital. The capital region Red Cross is on scene assisting.

One apartment was “pretty much burned down,” Maggiolo added, with some minor damage to adjacent apartments.

Two dogs were killed in the fire.

Maggiolo said that the driver of the fire truck knew the area, which helped save time as the fire hydrant could not be seen from the street because it was blocked by the car.

“He, of course, did what he had to do to run a hose around the around the vehicle and connect to the hydrant,” Maggiolo said, reminding drivers that parking in front of a fire hydrant and blocking access is illegal and can even be deadly as it could delay response time.

In recent years, Maggiolo said that firefighters have busted through windows in order to run the hose through the car and to the hydrant if a vehicle is blocking a critical source of water to a blaze.

“The fire hydrant is our water lifeline. If we can’t get to the hydrant or we’re delayed getting to the hydrant, the fire has time to expand and again, the threat increases,” Maggiolo said.

Even stopping for a quick moment could be critical time for firefighters. It could also get the vehicle ticketed and towed.

“That moment when you go into the store or you’re going to be doing some errand is when a fire can take place nearby,” he said.

Bars on windows keep intruders out, but can trap you inside during a fire. You need to have latches or other rapid means to open them from inside. A woman escaped the 37th Place fire by opening this latch on her window bars & exiting from this window. pic.twitter.com/if1Ja1t6vb

An additional hurdle to Saturday’s fire were barred windows in the first floor apartment.

“One woman in the rear had escaped — even though her window was barred, it had a gate device on it, allowing her to open the bars and escape through that window,” Maggiolo said.

If there are barred windows on a home for security, at least one should have a gate attached to allow for escape during an emergency.

“I know bars are intended to keep intruders out, but in a fire, they can also trap you inside,” Maggiolo said.