The 100-year-old Tuskegee Airman Brig. General Charles McGee of Bethesda, Maryland, is capping off a remarkable week which began at the Super Bowl in Miami where he presided over the coin toss and appeared as the president's guest at the State of the Union Address at the Capitol.
Listen now to WTOP News WTOP.com | Alexa | Google Home | WTOP App | 103.5 FM
(1/4) 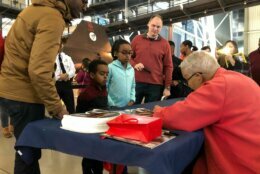 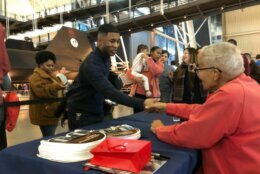 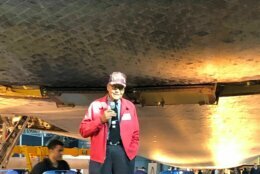 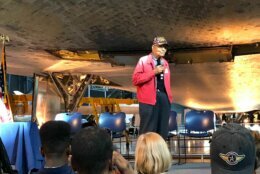 Capping off a remarkable week, 100-year-old Tuskegee Airman, Brig. General Charles McGee of Bethesda, Maryland was surrounded by admiring fans at the Smithsonian National Air and Space Museum on Saturday.

Following his appearance at Super Bowl 54 in Miami, where he presided over the coin toss and appeared as the president’s guest at the State of the Union Address, the retired general — who served in World War II, the Korean War and the Vietnam War — told a rapt audience at the museum’s Udvar Hazy Center about his military service.

Some of which took place during a time when the U.S. military was racially segregated.

“They did not want a white airman saluting a black officer,” McGee recalled about the period during World War II when he trained and fought among a group of African-American fighter pilots, overcoming racial barriers and helping the allies defeat Nazi Germany.

Museum visitors were enthralled to see the great airman — who patiently signed autographs, posed for pictures and delivered nearly 45 minutes worth of remarks — standing on stage beneath the five main engines of the space shuttle Discovery.

“This makes me so proud to be an American, honestly … I watched him on the State of the Union and I’m so happy that he’s here and we had the privilege to shake his hand and get his autograph,” said Mae Morey of Boston, Virginia, whose daughter Hollie Molliver is a U.S. Marine drill instructor and air traffic controller.

Beneath the display of aircraft hanging from the museum ceiling, people stood in long lines for the chance to meet one of the last surviving Tuskegee Airmen.

“It’s a very rewarding experience for us to actually get a chance to be in his presence and shake his hand and appreciate his experience and everything he’s done for us,” said Major William Samuel, U.S. Army, of Columbia, South Carolina visiting the museum with his wife and two small children.

At a question-and-answer session, the general was asked for his advice on leading a long life.

“To me life’s been a blessing — Why me? How me? And so on — somebody provided me with the strength, the skills and the longevity to still be here. That’s all I can say. Thank you, Lord, ” said General McGee to cheers and warm applause.