2 sent to hospital after fire at Van Ness office building 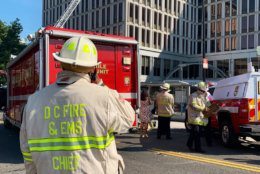 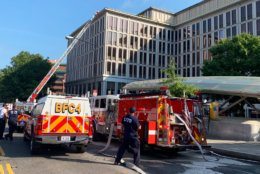 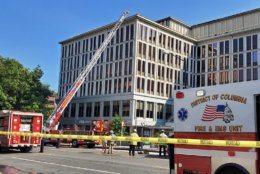 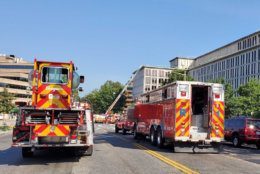 D.C. firefighters battled a blaze Wednesday morning at a large office building above the Van Ness Metro in Northwest D.C.

The two-alarm fire broke out shortly after 9 a.m. in an upper-level boiler room in the six-story Van Ness Center office building at 4301 Connecticut Ave. The office building is located across the street from the University of the District of Columbia campus.

Some 80 firefighters responded to the blaze. Fire officials said there were no injuries from the fire. One woman was injured after she tripped over a hose. A building maintenance employee was taken to the hospital for observation.

As of about 10:30 a.m., firefighters had the fire in the boiler room put out but were still searching the building for hot spots and clearing out smoke.

Initially, a firefighter spokesman erroneously told WTOP the fire was at the Embassy of Mauritius but that is not correct. The office building may contain embassy offices.

Ten occupants on the upper floors were rescued with a ladder truck.

At today’s 2 Alarm fire at 4301 Connecticut Ave NW, 10 workers in the upper reaches of the building were safely removed via aerial ladder, as normal interior means of egress were blocked by heavy smoke and heat conditions. pic.twitter.com/WCQYZ7lypI