The group, Moms Demand Action, a network within the Everytown for Gun Safety organization, invited residents, local leaders and anyone impacted by gun violence to join one of the many rallies happening this weekend across the country.
Listen now to WTOP News WTOP.com | Alexa | Google Home | WTOP App | 103.5 FM

Activists wearing red shirts marched the streets of D.C. Saturday to spread awareness about gun violence in their communities.

The group, Moms Demand Action, a network within the Everytown for Gun Safety organization, invited residents, local leaders and anyone impacted by gun violence to join one of the many rallies happening this weekend across the country.

“The background check bill has passed the House. We want the Senate to pass it, so we’re out here getting people to text and email and call their senators’ offices,” said Dorie Nolt, one of the organizers of the event.

As an education professional and parent living in Ward 5, Nolt said the violence students are exposed to in their neighborhoods and the added trauma of mass shootings and classroom active shooter drills is frightening.

“It breaks my heart that there are students who deal with gun violence all the time, and they’re still expected to function in school and out in the world with that kind of trauma,” she said.

Roger Marmet has been directly impacted by gun violence. His son, Tom, 22, had just graduated from school with hopes of becoming a social worker when he was fatally hit by a bullet while sitting in his car last year in D.C.

“It’s not even safe to just drive across town, and we have to do something about it. I hope our elected officials will also join in,” he said.

Ryane Nickens also shared her views. She lost her uncle in 1989 to gun violence and is now working with the TraRon Center to help end what she sees as a vicious cycle.

“Over 7,000 families in our city since 1989 have gotten that phone call that loved ones have been killed,” said Nickens. “Enough is really enough.”

Congress is on summer recess, but the Senate majority leader, Republican Mitch McConnell of Kentucky, has asked committee chairmen to review possible gun bills for consideration when lawmakers return in September. 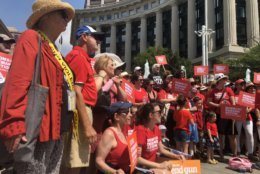 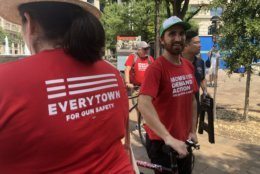 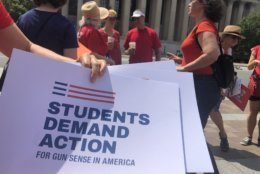 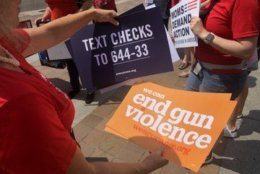