The reward for information on the person or people responsible for abusing and abandoning an emaciated puppy in Northeast D.C. earlier in July has doubled. See photos.
Listen now to WTOP News WTOP.com | Alexa | Google Home | WTOP App | 103.5 FM
(1/6) 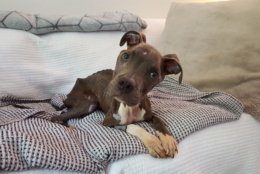 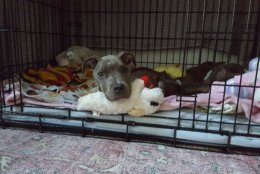 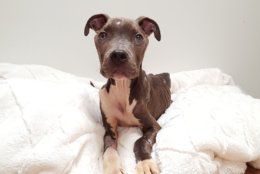 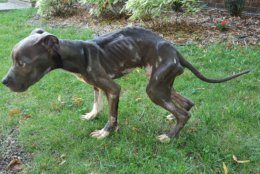 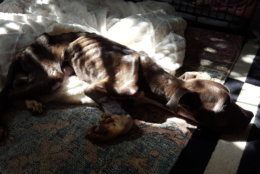 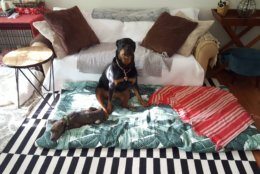 The reward for information on the person or people responsible for abusing and abandoning an emaciated puppy in Northeast D.C. earlier in July has doubled.

The Humane Society of the U.S. added an additional $5,000 to the initial $5,000 offered by the Humane Rescue Alliance for info that leads to an arrest.

Shepherd, as the puppy has since been named, was released from an emergency veterinarian July 17 and is currently in rehabilitative foster care to further recover and achieve a healthy weight.

He was unable to walk when he was found on Okie St. NE on July 10. But the HRA says he’s slowly regaining strength in his hind legs and has limited mobility.

Shepherd weighed just 15 pounds when he was found and now weighs 21 pounds, according to the HRA.

“This was long-term neglect; a dog doesn’t get into this type of body condition overnight … it was touch or go for a while on whether he would survive, but I’m happy to report that we provided emergency care, and he seems to have turned the corner,” said Chris Schindler, vice president of field services with the Humane Rescue Alliance.

Video surveillance images from around midnight on July 10 show a man abandoning Shepherd in the 1100 block of Okie Street Northeast, not far from 9th and New York Avenue.

The video shows that the man had been driving a four-door, dark-colored sedan, possibly a Dodge Charger, missing its hood.

“The puppy was wearing a harness with skull and cross bones on it,” Schindler said, hoping that someone recognizes the puppy. “We are determined to bring this dog’s abuser to justice.”