As the region has been flirting with almost record-breaking heat, a crowd gathered at in Navy Yard to help set a different kind of record — D.C.'s longest sundae ever. See photos.
Listen now to WTOP News WTOP.com | Alexa | Google Home | WTOP App | 103.5 FM

As the region has been flirting with almost record-breaking heat, a crowd gathered at in Navy Yard to help set a different kind of record — D.C.’s longest sundae ever.

The sun was nearing its peak as folks topped their portions of the 100-foot long treat with whipped cream, chocolate sauce and M&M’s. The idea came from Ice Cream Jubilee founder Victoria Lai, who wanted to do something special to commemorate National Ice Cream Day. She had no idea it was going to end up being at the end of a nasty heat wave melting the area.

“I just wanted to have a lot of fun with as many people as possible,” Lai said. “It turns out we set the record for D.C.’s longest sundae on D.C.’s hottest Sunday.”

The reception was great, as they had to open up additional tickets once the original ones sold out.

The flavors were all made-in-D. C. Jubilee originals: Thai Iced Tea, Passionfruit Guava, and Sweet Cream and Honey. It didn’t last long, as people scurried to the shade to enjoy the cool treats once their toppings were in place.

“We didn’t bank on the 100-degree temperatures,” said Jill Frederick, spokesperson for the group that manages The Yards, “but I feel like if you’re going to host an event outside, why not make it with ice cream?” 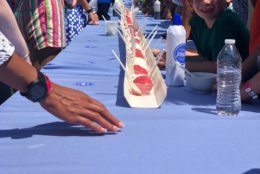 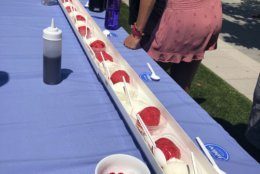 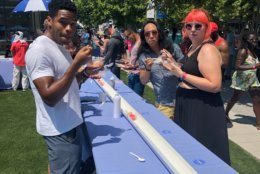 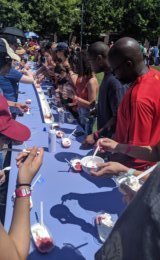 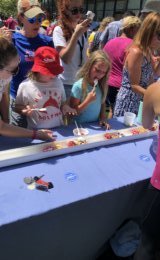 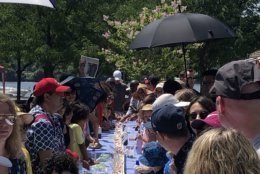 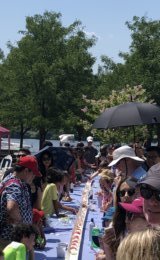 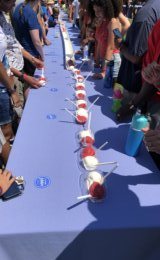