Housed in an eye-catching glass and steel building, the revamped International Spy Museum is a labyrinth of virtual and real sights and sounds that document the evolution of the sometimes dark and dangerous world of spying. See photos.
Listen now to WTOP News WTOP.com | Alexa | Google Home | WTOP App | 103.5 FM
(1/10) 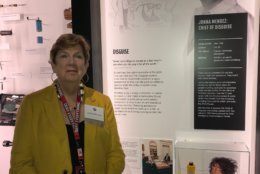 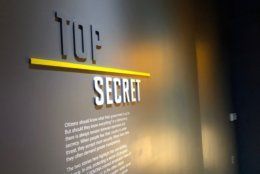 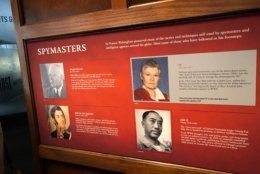 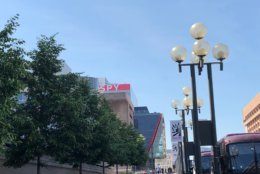 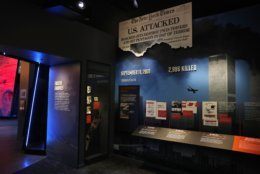 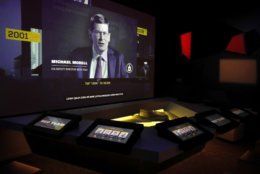 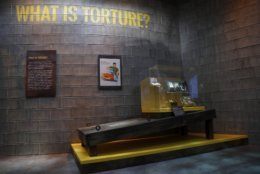 Centuries of espionage, including its cloistered history, images and tradecraft, are set to go on display in D.C. on May 12.

The International Spy Museum complex, housed in an eye-catching glass and steel building in Southwest D.C., is a labyrinth of virtual and real sights and sounds that document the evolution of the sometimes dark and dangerous world of spying.

Founder Milton Maltz, a U.S. Navy veteran who worked as a codebreaker in the 1950s, was inspired by a revelation during his service.

“When I was at the National Security Agency during the Korean conflict, I began to realize that the American public had very little knowledge of what intelligence was all about,” Maltz told WTOP.

Maltz set out to create an engaging experience that would tell the story of American espionage and intelligence from the very beginning. The story starts out with a letter written by first U.S. President George Washington.

The letter, written on Feb. 4, 1777, says Washington, “enlisted Mr. Nathaniel Sackett, a New Yorker who had proved himself a valuable spy catcher, as his ‘intelligence director.’ Washington agreed to pay him $50 per month plus $500 to set up a spy network.”

“The Culper Ring,” Maltz said, while facing a life-size sculpture of Washington reading the letter, “this was the beginning of when Washington formed the first intelligence ring, made up of six individuals, including a woman.”

The intelligence world has come a long way since its inception, and so has the museum. It first opened in 2002 in downtown D.C., on a busy street corner in a cramped neighborhood packed with restaurants and other museums.

The new 64,000-square-foot facility houses thousands of artifacts, videos, documents and engaging interactive visitor experiences. Among them is the work of Jonna Mendez, who started out as a secretary at the CIA and rose to become chief of disguise for the CIA.

“In terms of disguises,” Mendez said, “we did everything from the simplest to the most complex.”

She pointed out one of her most sophisticated creations and described it as “an animated mask that talked and smiled.”

Costa said the goal is to lay out the facts and pose questions that aren’t always answered. “We want to be provocative. We want to educate the public on this kind of work,” Costa said.

The museum, while presenting a captivating image of the cool, glamorous and entertaining side of intelligence, does not dodge the U.S. intelligence community’s missteps and significant blunders.

There is an exhibit that chronicles the debacle that was the U.S. government’s determination that Iraqi dictator Saddam Hussein possessed weapons of mass destruction in the run-up to the Iraq War — a claim that was later spectacularly debunked.

H. Keith Melton, a collector of spy artifacts who has given the museum the largest private collection of espionage artifacts in the world, is hopeful the public will see that the intelligence gathering, analysis and dissemination process is an imperfect one.

“There are successes and there are failures, and at the museum, we’ve tried to take a very balanced approach and show both successes and failures in a way and let people make up their own mind,” Melton said.

The museum, which features exhibits documenting espionage activities dating back to times before the U.S. existed, up to the present day, is designed to educate, and does it with what the museum says on its website is “a dynamic context to foster an understanding of espionage and its impact on current and historic events.”

The International Spy Museum ribbon-cutting on Saturday, May 11 will cause street closures this weekend.

From 12 a.m. on Saturday through 4 a.m. on Sunday, the 700 block of L’Enfant Plaza Southwest will close. The road will be posted as emergency no parking.

L’Enfant Plaza Southwest from Independence Avenue Southwest to 9th Street Southwest will close from 4 p.m. Saturday through 8 p.m. and will be posted as emergency no parking.