As the political stalemate in Venezuela continues, a volatile situation at the Venezuelan Embassy in D.C. is getting more intense. Three people were arrested during protests Thursday.
Listen now to WTOP News WTOP.com | Alexa | Google Home | WTOP App | 103.5 FM

As the political stalemate in Venezuela continues, a volatile situation at the Venezuelan Embassy in Washington is getting more intense.

Mirroring the actual conflict in the South American nation, supporters of Venezuela President Nicolás Maduro have been clashing with backers of opposition leader Juan Guaidó outside the embassy building in Georgetown.

Video posted online by the activist group Code Pink showed officers making arrests as protesters from both sides chanted and shouted. Members of the Secret Service stood between the two groups. 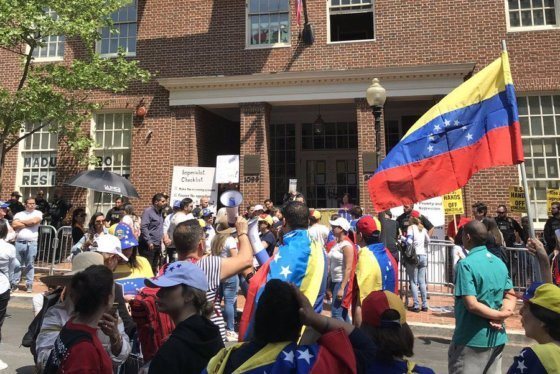 The Venezuelan embassy in Georgetown has become a microcosm of the political and social unrest that have gripped the South American nation since the heavily-disputed 2018 presidential elections.

Pro-Maduro activists moved into the embassy in early April as embassy employees from Venezuela returned to their home country. Many of the activists are American members of Code Pink.

In a written statement posted on Code Pink’s website, the group outlined their plans for occupying the embassy.

“With the consent of the present Embassy staff, we have been guarding the Embassy 24/7, sleeping on couches, holding educational events every night, decorating the building with banners against US intervention, and have plans to paint a mural,” the group said.

Those who support Guaidó — who is recognized as the legitimate president of Venezuela by dozens of countries, including the United States — launched a counterprotest in front of the building.

The United States has imposed sanctions on Venezuela’s oil industry as well as on key figures in Maduro’s government, which is digging in despite dire economic and humanitarian problems that have forced around 10% of Venezuelans to leave the country in recent years, creating Latin America’s biggest migrant crisis.

President Donald Trump has indicated that the United States is not focusing on a military option for now.

“We’re doing everything we can do, short of, you know, the ultimate,” Trump said in an interview Wednesday on Fox Business Network. “There are people that would like to have us do the ultimate, but we have a lot of options open. But when we look at what’s going on there, it’s an incredible mess.”

Trump said Maduro was “tough, but I think he’s losing a lot of control.”