The bells of Washington National Cathedral tolled Thursday afternoon as a show of support for Notre Dame Cathedral after a fire ravaged the 850-year-old structure in Paris, France. Although D.C.'s cathedral is just over 100 years old, it has faced its own structural issues after a 2011 earthquake.
Listen now to WTOP News WTOP.com | Alexa | Google Home | WTOP App | 103.5 FM

On a spring afternoon in Northwest D.C., the sound of a Bourdon bell echoed through the streets. It was the sound of the Washington National Cathedral’s show of solidarity with France’s Notre Dame after a fire devastated the 850-year-old cathedral in Paris on Monday.

D.C.’s gothic cathedral joined other churches and cathedrals around the world in ringing their bells at the same time to honor Notre Dame.

“Along with so many other people across the world, our hearts and prayers go out to the people in Notre Dame in Paris, over the loss of that incredible structure,” said Very Rev. Randolph Hollerith, dean of the Washington National Cathedral.

The Washington National Cathedral considers itself a sister cathedral to the Notre Dame, even though Notre Dame is of the Roman Catholic Church and D.C.’s cathedral belongs to the Episcopal Church.

The impact of the fire was felt across the globe and transcended religion for many people, Hollerith said.

“It awakens people to what these, whether you’re a person of faith or not, what the cultural icon of these spaces are,” Hollerith said. 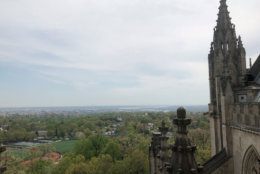 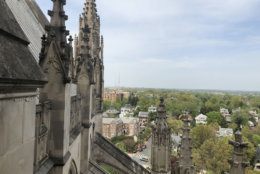 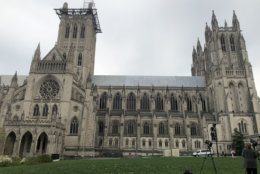 When it came to the design, Notre Dame helped inspire plans for Washington’s Gothic cathedral, which was constructed beginning in 1907. The D.C. cathedral pays homage to the iconic building in France, with a stained-glass window depicting Notre Dame.

The inner portions of Washington’s cathedral make it a more modern cathedral and less likely see the same amount of damage during a fire, which was seen in France, according to cathedral director of preservation and facilities Jim Shepherd.

He said that while Washington’s cathedral and Notre Dame are similar when it comes to the use of limestone on the exterior, Notre Dame had many wooded supports, whereas the younger D.C. cathedral is made mostly of brick and concrete.

“We are pretty risk-averse to fire here, but that does not mean we’re not taking precautions to make sure we are as safe as possible,” Shepherd said.

Joe Alonso, head stonemason at Washington National Cathedral said he has crawled through the attics of many cathedrals, including Notre Dame, and said while doing so, he recalled being thankful D.C.’s cathedral uses steel beams and not wooden beams.

Shepherd said after the Paris fire, staff in the D.C. cathedral held several meetings to ensure all the proper fire-prevention methods are in place, which he said they are. Shepherd also said the cathedral has been in the process of implementing a more robust fire safety plan.

Shepherd said Washington’s cathedral is up to code when it comes to electrical wiring, lessening the chances of an electrical fire, which is suspected to be the cause of the fire in Paris.

Shepherd and Alonso are familiar with the process of repairing a Gothic cathedral after a disaster. A 2011 earthquake caused $34 million dollars of damage to the Washington National Cathedral. Eight years later, repairs are only halfway done.

Alonso said based on the images he’s seen of Notre Dame’s damage, even with best stone workers, the job will take at least 10 years to complete — if not longer.

“You know when I heard the president of France say five years, I said, ‘What?’” Alonso said.

He said Gothic buildings are among the most complex to rebuild, and the process shouldn’t be rushed.

Shepherd agrees that even with a lot of donations coming in, the Notre Dame rebuild could last a lot longer than five years — and according to him, that’s OK.

“Quite frankly it probably should because they have a lot to think through about their approach,” Shepherd said.