If you wanted to slow down legislation moving through Capitol Hill, you might go visit one of the lobbyists working out of an office on K Street. If you wanted to experience an egregiously slow commute with the occasional illegal turn, you’d also visit K Street. But D.C.’s mayor is pushing for major changes to remedy that.

The proposed K Street Transitway has been more of an aspiration than a reality for many years now. At one point it was even going to be redesigned to help move the city’s street car system from Union Station to Georgetown. 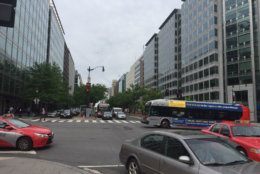 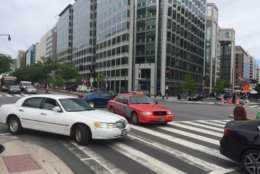 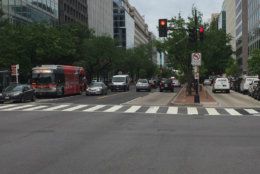 That part might be on hold now, but the mayor still plans to push the D.C. Council to fund the $122 million she’s requesting to radically reshape the road, all the way down to those confusing, concrete islands shielding turn lanes and parking spots.

The biggest change would be the creation of a dedicated bus way in the middle of the road. Taking the two existing far left lanes right down the middle, the bus lanes would allow buses to move down K Street between 12th and Washington Circle without the constraints the current turn lanes impose.

The bus lanes would be separated by concrete islands similar to what’s toward the right side of the road in each direction, allowing for covered bus stops and other pedestrian amenities. Without the other cars to get in the way, it theoretically allows buses to move across town faster than they currently do.

Flanking each side of the bus lanes would be up to three lanes of traffic in each direction. It would rid K Street of those shielded turn lanes, and with parking banned during rush hour, allow traffic to flow up and down K Street in a smoother fashion. It would also eliminate illegal turns from the main travel lanes around the turning lanes.

Parking would still be allowed along the curb during off-peak times, providing two lanes in each direction in addition to the bus lanes.

For the proposal to be approved, the D.C. Council will have to agree to spend the $122 million in the upcoming budget, which is due to be approved later this spring.