WASHINGTON — Couples are again able to get married in the District.

Mayor Muriel Bowser signed emergency legislation Friday giving her the authority to issue marriage licenses during the partial federal government shutdown. D.C.’s courts had previously determined they were unable to issue licenses as they did not fit the definition of essential services.

Caitlin Walters said she and her fiancé, Kirk Kasa, both from New York City, were “really relieved and excited” that the issue was resolved before their Feb. 2 wedding in D.C.

“We went to Catholic University,” Walters said. “We’re doing our ceremony on campus actually, so

it was very important to us.” Sh hopes the shutdown ends by the couple’s wedding date so friends and family can enjoy museums and trash-free parks.

The bill signing came in the nick of time for Claire O’Rourke, who is set to be married to Sam Bockenhauer on Saturday. However, the shutdown is still affecting them. “We had planned to take our wedding portraits at the National Portrait Gallery, which unfortunately is also part of the shutdown,” O’Rourke said. They hope to use the National Building Museum instead.

Dan Pollock and Danielle Geanacopoulos, of New York City, celebrated their wedding on Dec. 29 and now hope to make things official through D.C.’s Office of the Secretary, which is issuing the licenses. “Hopefully we’ll be fully married after two long weeks,” Geanacopoulos said. 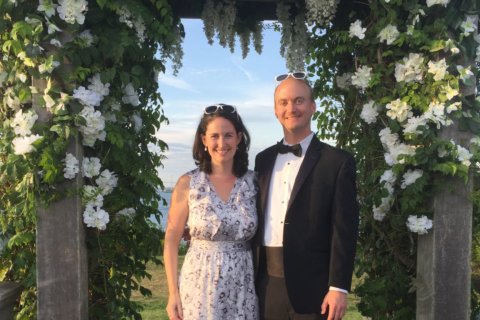