Normally, holding an annual snow summit in mid-November would be ahead of the game. But this year, Mother Nature beat D.C. to the punch, dropping a mix of snow and sleet on the city two days before an annual convention meant to show off the latest snow preparation efforts.
Listen now to WTOP News WTOP.com | Alexa | Google Home | WTOP App | 103.5 FM
(1/3) 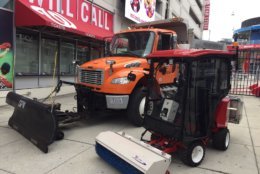 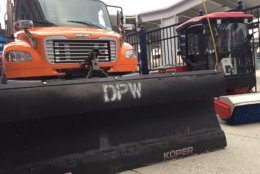 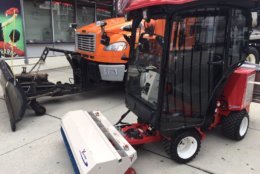 WASHINGTON — Normally, holding an annual snow summit in mid-November would be ahead of the game.

But this year, Mother Nature beat D.C. to the punch, dropping a mix of snow and sleet on the city two days before an annual convention meant to galvanize workers and show off the latest efforts to keep traffic flowing and schools open.

“Our operation was on full display,” said Chris Shorter, director of the DC Department of Public Works. “Fortunately, even though the storm over performed and was a little more than we expected, we had enough equipment and we certainly had enough manpower on District roads to make sure we were clear and that the District opened for business.

“I’m happy to say that the schools opened on time Thursday morning and on Friday morning,” Shorter added.

Shorter joined directors of other city agencies in gathering outside of Nationals Park on Saturday morning to talk winter weather preparations.

“Going into the 2018-2019 winter season, we have a robust operation,” said Shorter. “The DC snow team includes 834 personnel, 210 heavy plows, 181 light plows, and 28 liquid dispensing trucks, among other materials and assets.”

The one blemish in the city’s response came Friday morning, when the Chain Bridge froze over early in the morning after the precipitation stopped.

When a plow drove over the bridge around 2 a.m. Friday, it was still raining. No one ever went back to treat it after the rain stopped, and after it froze over, police closed down the bridge during most of the morning rush hour — something Shorter called a “lesson learned.”

He said in the future, bridges and overpasses could get a second treatment in the overnight hours to make sure it doesn’t happen again.

The city is also vowing to make bike lines and paved trails a bigger priority this winter.

“It is a big part of our snow program, and we have purchased equipment in the offseason to make sure we are prepared to treat bike lanes and nonmotorized trails with the same efficiency and effectiveness that we treat roads and bridges,” said Shorter. “It’s why we purchased new equipment.”

That new equipment is actually different from what was used last year, which Shorter said worked well, but wasn’t quite as nimble as the city needed.

“This blower will allow us to spread [and] to plow on bike lanes,” he added. It’ll be attached to an ATV that city workers will used to get through what can sometimes be narrow bike lanes. “It’s a great piece of equipment and we’re looking forward to using it this season.”