Vigils planned in DC for 11 dead in Pittsburgh synagogue shooting

In light of Saturday's shooting at a Pittsburgh synagogue that killed 11 people, multiple groups throughout D.C. are holding vigils Sunday and Monday to mourn one of the deadliest attacks on Jews in U.S. history.
Listen now to WTOP News WTOP.com | Alexa | Google Home | WTOP App | 103.5 FM

WASHINGTON — In light of Saturday’s shooting at a Pittsburgh synagogue that killed 11 people, multiple groups throughout D.C. are holding vigils Sunday and Monday to mourn one of the deadliest attacks on Jewish people in U.S. history.

The 20 minute-attack during a baby-naming ceremony at the Tree of Life Synagogue in Squirrel Hill also wounded six others, including four police officers. The suspect, Robert Bowers — believed to have spewed anti-Semitic slurs and rhetoric on social media — was charged with 29 federal counts, including hate crimes and weapons offenses.

Multifaith groups are planning gatherings to mourn those lost and support survivors and their families.

The National Solidarity Rally with Pittsburgh and Jewish Communities will gather Sunday night to demand the White House take responsibility for what they believe as fomenting anti-Semitism and violence, the vigil’s host Bend the Arc Jewish Action said.

The DC Community Minyan for the Tree of Life Synagogue will hold a minyan, a Jewish prayer service, Sunday night in support of the survivors of the shooting.

The Solidarity Vigil for Victims of anti-Semitism and Racism will follow the minyan to mourn those killed in Sunday’s shooting.

The Community Interfaith Service & Solidarity Gathering will be a communitywide interfaith service and solidarity gathering with various interfaith organizations on Monday. 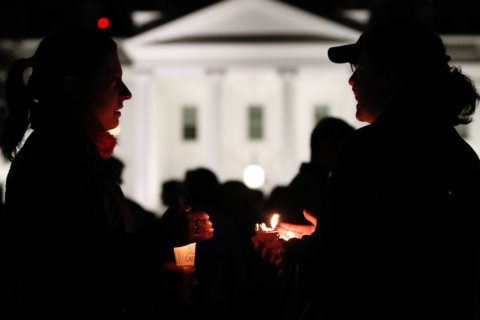