The resignation of Theodore McCarrick from the College of Cardinals following allegations of sex abuse makes him the highest ranking American in the Catholic Church to ever be removed from the ministry. Cardinal Wuerl comments on the resignation in an exclusive interview with WTOP.
Listen now to WTOP News WTOP.com | Alexa | Google Home | WTOP App | 103.5 FM

WASHINGTON — The resignation of Theodore McCarrick from the College of Cardinals following allegations of sex abuse makes him the highest-ranking American in the Catholic Church to ever be removed from the ministry.

In what’s being called an unprecedented move, Pope Francis accepted the resignation of former Archbishop of Washington Saturday, before the accusations are investigated by church officials. Francis received McCarrick’s resignation letter Friday.

“I think this was a big step forward in trying to act quickly, decisively, even though the whole procedure isn’t concluded yet,” said Cardinal Donald Wuerl who succeeded McCarrick as the Archbishop of Washington. “The pope is saying that we need to show that we are hearing these things, paying attention and acting.”

McCarrick has been ordered by Pope Francis to conduct a life of prayer and penance, which Wuerl says is essentially a banishment from public life as a priest until he goes on trial in the church.

“It says he is not permitted to be engaged in any public activity,” said Wuerl. “You just are no longer engaged in public events, public appearances, public work, you spend your time quietly in prayer … But you’re completely now removed from public life.”

Wuerl said that type of banishment has happened to priests and bishops before, but McCarrick’s resignation now extends it to a cardinal.

The first public allegations against McCarrick were revealed last month, and while they were deemed credible by the church, he denied anything inappropriate happened. More allegations, and word of some settlements that were made before McCarrick came to Washington, have been made public since then.

Saturday, one of the McCarrick’s alleged victims spoke with NBC Washington. (Editor’s note: The video contains some graphic descriptions.)

In a Sunday statement, the Archdiocese of Washington said that after the first allegations were made in New York, it reviewed its own files and found “no complaints of any kind” were made against McCarrick.

The statement went on to say that the media reports of alleged abuse by McCarrick in the D.C. area were “not known to the Archdiocese of Washington” before now. It praised the victims for “courageously stepping forward” and sharing their stories.

“The archdiocese encourages all coming forward to share these experiences with any diocese in which they reside so that these grave issues can be reviewed promptly by Church authorities, and that we can offer assistance to begin the process for healing and peace,” the statement said.

In the early 2000s, Wuerl and McCarrick were bishops who helped create the Charter for the Protection of Children and Young People, which was supposed to guide the church through sex abuse scandals rocking the church in parishes and dioceses around the country. Even though the wording of the document was changed in a way that critics say exempted bishops, Wuerl says this outcome is proof that the reforms it brought about are working.

“We’re talking about things that now happened decades ago, and people are now coming forward and saying, ‘I know I’m going to get a hearing in the church,’” said Wuerl. “It’s encouraging people who have kept these things buried to step forward and say, ‘Even though this happened a long time ago, I want you to know it happened.’”

“This decision highlights for me … that the pope takes very seriously the allegation of an abuse of a minor,” added Wuerl. He said both McCarrick’s resignation and the pope’s acceptance of it mean that “if we’re moving forward, these are signs of that progress.”

Wuerl said he has never been approached with allegations of abuse by McCarrick and was unaware of the rumors that have been associated with his predecessor.

Watch the interview with one of McCarrick’s alleged victims below. (Editor’s note: The video contains some graphic descriptions.) Archdiocese: No claims made against Cardinal McCarrick during his time in DC 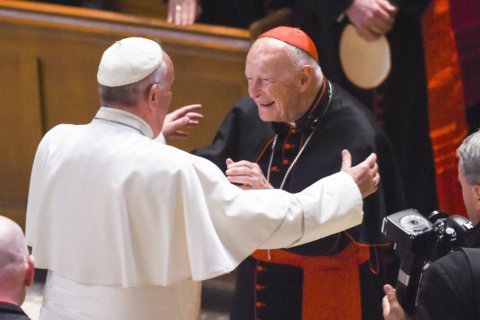