WASHINGTON — The man who police say gunned down a 23-year-old woman in a daytime drive-by shooting in Southeast D.C. earlier this year was upset someone had stolen a golden handgun he frequently showed off on social media, according to investigators.

At a Friday news conference, D.C Police Chief Peter Newsham announced 20-year-old Torey Stockton of District Heights, Maryland, had been arrested and charged with first-degree murder while armed in the shooting death of Jasmine Light. Stockton had been locked up in the D.C. jail since late January on a gun-possession charge and was initially due to be released Thursday, Newsham said.

Stockton’s Instagram posts about the stolen golden Glock — and the use of facial-recognition software — helped identify him as a suspect in the case, police said in charging documents filed this week.

The documents also reveal new details about the Jan. 17 shooting, which came as D.C. Mayor Muriel Bowser and Newsham held a news conference a few blocks away about an unrelated shooting.

Light was killed in a hail of bullets as she stood with a small group of people in front of the King Convenience Store on the corner of 16th and U streets Southeast. Witnesses said they heard screeching tires and saw a silver Toyota Camry approach the convenience store, according to police. One witness reported seeing a front-seat passenger open fire with a black gun. Police later said they recovered 15 cartridge casings from the scene.

Light was not the intended target of the shooting, police have said.

“This was a young lady who, by all accounts, had turned her life around,” Newsham said Friday.

Three other people were injured in the shooting, which was captured on the store’s surveillance cameras.

In the charging documents, police said a witness to the shooting came to authorities after reportedly seeing posts shared on Instagram by Stockton about a stolen golden Glock.

In one video posted to the site, the witness said Stockton was seen waving a black gun around and stating that he said he would kill people if he didn’t get his gun back and that he would continue the attacks until he received his gun.

While many of the account’s posts had been deleted, D.C. police said agents from the Bureau of Alcohol, Tobacco, Firearms and Explosives had also seen images of the golden gun on the Instagram account before the drive-by shooting and preserved them. According to the documents, an ATF special agent also overheard a phone call involving Stockton in which he was upset about a stolen gold “glizzy” — street slang for a Glock.

Stockton reportedly told another witness he let a friend borrow the gun but the friend ended up stealing it, according to the documents. Stockton went looking for the friend in the area of 13th and U streets in Southeast D.C., the witness said.

When Stockton was first questioned by police in January, he denied any involvement in the drive-by. He told police he was with his grandmother near Fredericksburg, Virginia, at the time of the shooting.

Police said they also received a number of tips about the shooting, which implicated Stockton.

One witness who had conversations with Stockton provided information that was not public knowledge, police said, including the fact that the Toyota Camry involved in the drive-by had been set on fire and abandoned in Southeast D.C. the day after the shooting.

Tywan Porter, 25, turned himself in, Newsham said. He has been charged with second-degree murder while armed.

Police found Mosby shortly before 2 a.m. May 26. lying in front of an apartment building on Savannah Terrace with a gunshot wound to the chest. He was rushed to the hospital but died in the ICU, police said.

Mosby’s death came amid a bloody Memorial Day weekend in D.C., in which police responded to 10 shootings. Four people were killed and at least three injured in the weekend’s violence. With Porter’s arrest, Newsham said, D.C. police have arrested suspects in all of the fatal shootings that weekend. 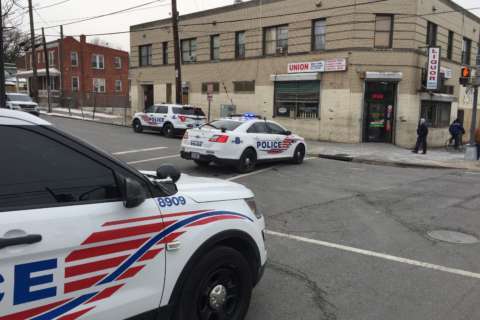