WASHINGTON — A drive-by shooting in D.C.’s Anacostia neighborhood, just down the street from the scene of a teenager’s fatal shooting earlier this week, left four people injured Wednesday morning.

D.C. police were called to the area of 16th and U streets SE — near the Frederick Douglass National Historic Site — just after 11 a.m. for a report of the shooting. The shooting response interrupted a news conference at a church a few blocks away with Mayor Muriel Bowser and Police Chief Peter Newsham, who asked for the community’s help identifying the shooter responsible for the death of 14-year-old Steven Slaughter on Sunday.

Police said that on Wednesday a light-colored sedan was driving on 16th Street when an occupant opened fire on people standing outside a small market. The vehicle continued driving up the street.

Two men and one woman were found with gunshot wounds at the scene. The males have nonlife threatening injuries, but the woman “is in very, very serious condition,” Newsham said.

A fourth victim showed up at a local hospital with a graze wound, Newsham said.

“What we have here is a brazen disregard for public safety — someone who came into this community with intent on doing harm with no regard for anybody who lives out here,” Newsham said at a news conference. “Opening fire in the middle of the day on a street where people are just visiting a grocery store is unacceptable in our community.”

Newsham said it’s not clear if there a motive for the shooting nor what led up to it, but police said they will investigate and “someone is going to be held accountable for this.”

Police are looking for the vehicle involved, which may have its windows shot out or damaged.

It’s troubling that Wednesday’s shooting happened so close to the shooting of 14-year-old Slaughter, Bowser said.

“Anytime that we have violence in our communities, we all need to respond with the full force of the government,” Bowser said.

Ambulances and fire trucks with their sirens blaring headed to the scene of Wednesday’s shooting, interrupting officials’ comments on Slaughter’s death.

Slaughter’s death investigation is still ongoing, and Bowser said Wednesday’s case will be investigated with the same vigor.

“The bottom line is that we have other families who are victims of this violence and we have to get to the bottom of who’s responsible.” 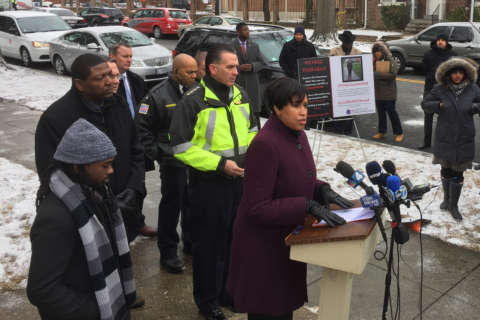