WASHINGTON — A deadly holiday weekend in D.C. ramped up Friday night and seemed to continue unrelenting as officers responded to the eighth shooting in three days.

D.C. Police Chief Peter Newsham said he plans to reach out to federal partners to re-strategize about how to target illegal guns, which he told WTOP Monday morning are at the heart of the violence.

The first shots were reported at 9:30 p.m. Friday on Crittenden Street in Northwest, and by 10:30 a.m. Saturday, D.C. officers had responded to seven shootings across the city.

“One of the things that is particularly troubling about Friday night is a local business owner from Ward 8, Alexander Mosby, was murdered in one of the shootings. This is a guy who was beloved by the community; when something like this happens the entire community gets upset by it,” Newsham said.

Detectives are making progress in solving Mosby’s killing, the chief said. Investigators are looking for a silver Infiniti SUV in connection with his shooting. Meanwhile, city leaders have called for a stop to the violence.

“Mr. Mosby’s passing is tragic, and our thoughts and prayers are with his family, friends and the community that looked up to him,” Mayor Muriel Bowser said in a statement. “We cannot express enough the need to get illegal guns off of our streets and out of our neighborhoods to stem this senseless violence. We as a community must come together to say enough is enough.”

A husband and wife were killed in a shooting Saturday night on Galveston Street, in Southwest, when two families got into a dispute and someone introduced a gun, Newsham said.

“It is heartbreaking. Immediately, we have the Child and Family Services Agency step in. We’ll get the kids off to some other family members if that’s a workable option,” Newsham said.

Newsham said his officers responded by increasing their presence by 25 percent in Wards 7 and 8. The city also responded by deploying non-law enforcement agents to neighborhoods and pools in Wards 5, 7 and 8 and asked the Department of Youth Rehabilitation Services to conduct citywide check-ins with those juveniles under its supervision, according to a release from the mayor’s office.

“I think it’s appropriate that all our city leaders take notice. To have seven shootings in one night is unacceptable. I do believe that can help,” the chief said, adding he plans to reach out to federal and local partners for resources which he said can only help.

At least two stabbings and multiple robberies were reported in the District over the three-day holiday. 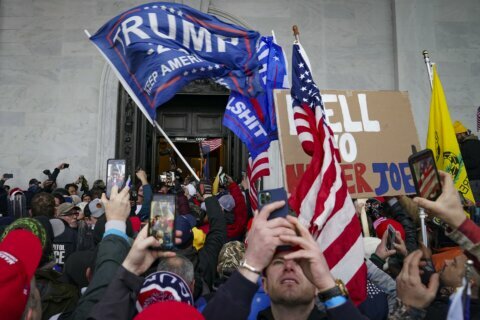